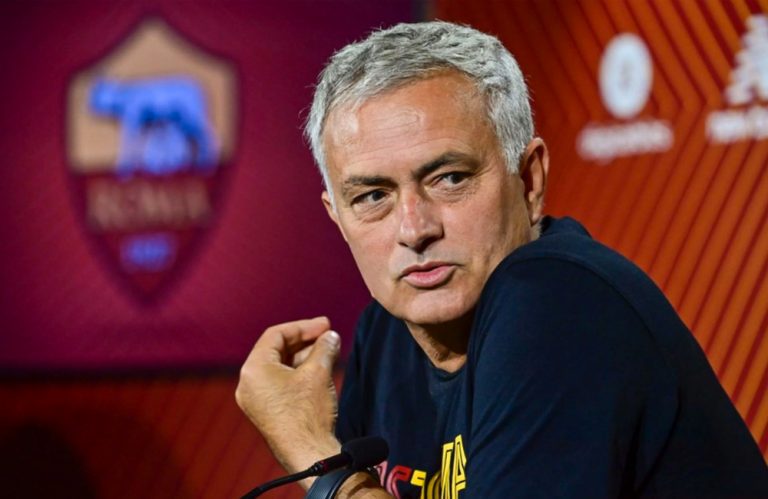 With only two league matches remaining, Roma boss Jose Mourinho urged his side to remain concentrated entering the final stretch of their season.

The Giallorossi host Venezia tomorrow evening in the Italian capital before their league finale against Torino next Friday. They’ll then prepare for their Conference League final showdown on May 25th against Feyenoord in Tirana.

“I don’t think the final will distract from what we need to do over these final two games. I hope not,” began Mourinho.

“I want to finish fifth or sixth and we will do everything over these two games to achieve that objective. Though, I’ve seen some suggesting we should finish eighth in the table then win the final, meaning eight teams from Serie A would qualify for Europe.”

“This would be fantastic for Italian football but this shouldn’t be done at the cost of injustice and disrespect for those clubs working just as hard as we are.”

He continued, “We need to win tomorrow because we need the points, because it’s our last home game of the season, and because we want to go into the last game of the campaign in charge of our own destiny.”

“So there will not be much rotation tomorrow. Perhaps there will be one or two changes, and then one or two different changes against Torino. But we can’t make wholesale changes.”

The Portuguese technician also addressed the situation of injured attacker Henrikh Mkhitaryan. The Armenian suffered a groin injury two weeks ago in the first leg against Leicester City, which ruled him out for three weeks.

“Mkhitaryan is injured right now. We’re focused solely on tomorrow and he doesn’t factor into the discussion for this game because he’s injured.”

“I don’t know if he’ll recover for the final but he’s not even under consideration for tomorrow, he’s completely unavailable.”

Tomorrow also marks Roma’s final home game of the season and the Stadio Olimpico is once again expected to be jam packed with over 64,000 in attendance.

“The least we can do is thank the supporters after the match tomorrow. I can thank them here and the players can thank them on social media but it’s more symbolic to do it after the game in front of them.”

“So we’ll go around the stadium tomorrow and thank them, it’s the minimum we can do, they’ve been fantastic this season.”

When asked about the pressure of playing the two remaining league matches given the heated competition for a Europa spot, Mourinho said, “I’m not afraid of any lack of concentration. We are a little tired of the officials at VAR who are then punished each time there is an episode.”

“It’s already happened often. This is a way to say “they were wrong,” but in the end where are the points that were taken from us?”

Before exiting, Mourinho gave a shout out to former Roma boss Zdeněk Zeman, who’s been in a war of words with the Special One throughout the season.

“Ah, I know I’m one day late but before I leave I send my best wishes to Mister Zeman, whose birthday was yesterday,” he smirked before leaving Trigoria’s press room.