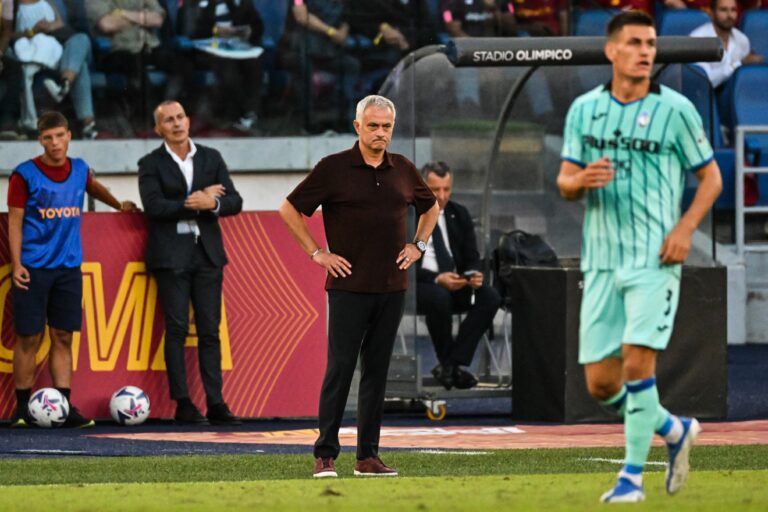 Following a frustrating evening for the Giallorossi, Jose Mourinho gave a brief update on Paulo Dybala who was forced to forfeit the match only a few minutes before kick-off. The Special One also addressed the heated exchange with match officials which provoked a red card for the boss.

“Dybala suffered a hamstring injury, which is difficult both for him and the team,” he told the media after the game. “It happened only half an hour before the match.”

“If you look at how we dominated in the last portion of the game, one could even hypothesize that with Paulo out there it would have been a different outcome.”

“But, that’s what could have been and wasn’t. Those who played, played in a way that would have made it easy to win tonight. Unfortunately we failed to score and lost because of it.”

Mourinho announced that Pellegrini suffered an injury during the game, but continued to play despite the pain. “Now we have an issue with Lorenzo who pulled a muscle in his leg,” said the Special One.

“He didn’t want to leave once we went down 1-0. He wanted to play until the end like a true captain, like someone who wanted to help but that’s a problem for us now.”

“We will have to see if two weeks is enough of a break to recover both Paulo and Lorenzo,” concluded Mourinho.

Mourinho also touched upon Tammy Abraham’s struggles in front of goal. “Tammy is an extraordinary lad, who wants to do well, who suffers when he does not do well, who’s now living a difficult moment between the small injury he suffered a while ago, some games that didn’t go too well… he’s certainly in a slump.”

“The forwards are a bit like that. But today I don’t want to criticize him, he continues to be the same professional and nice lad, he is not here on vacation but to learn and improve.”

“He will come out on top, there are many players who are going through a similar stretch, he is not at this best yet.”

“We studied our opponent for tonight. We worked a lot with Paulo for this game as Nemanja was scheduled to rest and enter only in the second half. The plans changed. But, we still dominated, created a lot and for this reason I leave tonight without feeling any remorse toward my players.”

“We didn’t score and we had a lot of chances to do it. We played here with Monza and Cremonese, this was the easiest match of all of them, and we dominated. It was all easy for our defenders, we created a lot but football can be like that.”

On the heated exchange with match official Chiffi, Mourinho remarked, “I went to the referee to ask him why he didn’t give a penalty in the first half.”

“I told him I want to be the best possible coach in the world, telling my players not to dive if they can continue the action, I asked him if it is impossible to give a penalty if the player does not throw himself on the ground.”

“If he says yes, I change my training with my players and tell them to go for it. He didn’t answer me. I wanted an objective answer and his observer politely replied that it depends on the criteria, and he didn’t answer me.”

On the international break, Mourinho concluded, “Paulo Dybala and Pellegrini are injured. We can recover El Shaarawy and Kumbulla who are already out, but we’ll see.”

“It is two weeks in which players like Belotti, Camara need to work to improve their physical level. Beyond this, nothing, a few days off, there isn’t much to do. I would prefer Lorenzo and Paulo in the national team, it would have meant that they would not have worked with us but would have been ready for the next one.”