Mourinho speaks ahead of Sampdoria clash: “Tomorrow we play to win.” 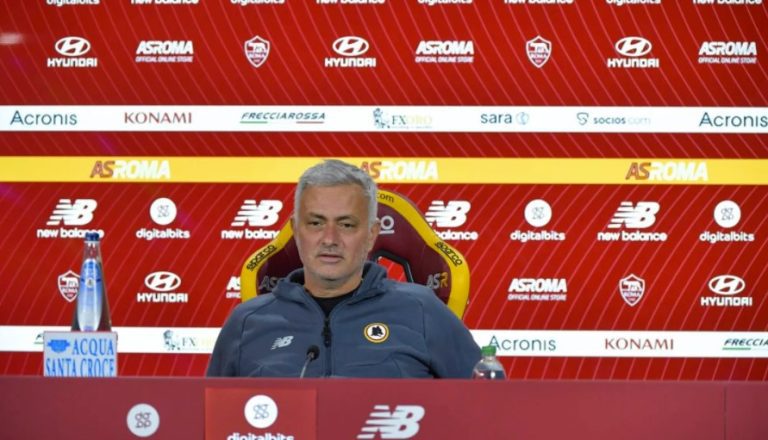 Earlier this afternoon, Josè Mourinho addressed the media ahead of Roma’s away game to Sampdoria for their first fixture after the international break.

The Portuguese manager briefly touched upon Leonardo Spinazzola’s recovery, which has been subject to several rumors since his scheduled consultation in Finland with Dr. Lasse Lempainen.

“For Spinazzola the news are mostly positive, but it seems that you are trying to see whether he can feature in a game or at least play a small portion of a match and that is impossible for us to say right now.”

“He hasn’t trained with the team in a long, long time. Little by little he’ll begin to train with the team: everyone’s happy about it, the medical department and everyone included.”

“We do not mean that he will be back next week or in the last game of the season. We are all optimistic right now, and the player himself is super happy.”

On Zaniolo, Mourinho said, “Zaniolo is injured. He returned injured from the national team. On Thursday he arrived at Trigoria with a problem with his flexor muscles.”

“He hasn’t trained and is not available tomorrow. Everyone else – no problem”

He added, “Veretout hasn’t trained, and all I can say is he’s not there.”

The Special One tried to clear the air around Zaniolo and made the following comment, “The only thing I can say about Zaniolo: there are many players who go to the bench for a game or two, every now and then. It’s a normal thing.”

“I don’t see these questions with other clubs, other coaches. Zaniolo went to the bench against Lazio. We adopted a different strategy, with the aim of winning the match and we did. There is no controversy.”

“He arrived on Thursday morning with a problem with his flexors, we cannot control what is happening in the national team. He didn’t train with us, he is the first one who lets me know when he’s unavailable.”

“Zaniolo’s situation is simple, there is nothing to say. Call Zaniolo or the agent, they can tell you the truth.”

On the whether he fears that the team might draw to Sampdoria after all the excitement following the win of the Derby della Capitale:

“Sometimes a draw isn’t a disaster. It is a consequence of balance, perhaps because the other team wants points more than you do.”

“Sometimes it can happen in a team that doesn’t have the mentality yet to try and win something. Each point is important, if you have a drop in form and you lose points in the end you win or lose based on these drops in concentration. We talked about it yesterday.”

“The derby we are interested in is the one next year. We are focused on the next match. Think of that beautiful stadium, think of a good coach like Giampaolo. Think about their wonderful fans, and their team that needs points. Tomorrow we have to play really well to win.”

When asked about the formation he plans to use, Mourinho replied, “Playing with 3 at the back is a solution that has given stability to the team. I think it suits the characteristics of players that we have.”

On the team’s tendency to miss numerous chances, Mourinho concluded, “We’re a team that creates a lot. It’s nothing new, this problem of ours. We’re simply trying to win games at all costs. Sometimes we do win, and sometimes we come up short.”

“Right now we’ve found some continuity, 9 games unbeaten in the league. Perhaps we could have had some more points, perhaps turning a draw into a win. But we have to stay calm, there’s still more work to be done.”