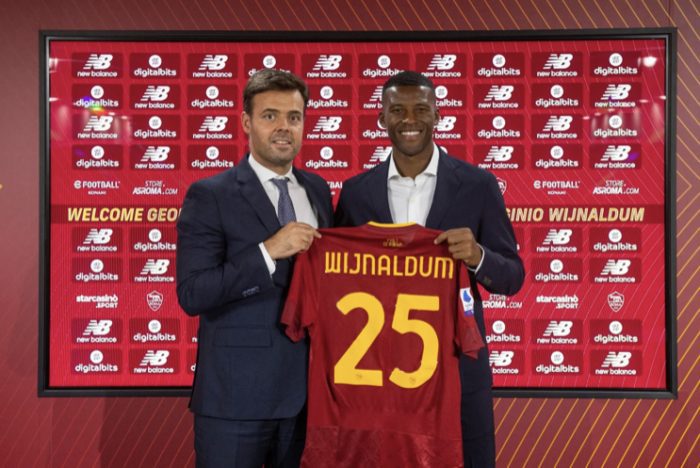 Georginio Wijnaldum is officially a new Roma player as the club made the signing official via their official website.

Roma made the following announcement:

The club is delighted to announce the signing of midfielder Georginio Wijnaldum.

As part of the agreement, there is an option for the transfer to be made permanent at the end of the 2022-23 campaign.

“It’s a really good feeling to be a Roma player,” Wijnaldum said.

“Everyone I have spoken to has given me great feedback about the club and its fans.

“The club made it clear just how much they wanted me in the efforts they made to complete the deal, which always gives a player a lot of confidence and belief. The reception from the supporters, on social media and elsewhere, has also been fantastic.

“I promise to give 100% and help the team compete for all our targets this season.”

He has won the Champions League, Premier League and Ligue 1 already in his career, alongside domestic cup success in both England and the Netherlands.

“Georginio’s decision to come to Roma is yet another example of players of the highest level, both in terms of their qualities on the pitch and off it, believing so strongly in the club’s plans that they put all their energy into ensuring that negotiations reached a positive outcome,” said Tiago Pinto, the club’s General Manager.

“We can not be anything other than delighted at his arrival.

“Gini brings qualities that will further enhance the competitiveness of our squad and a natural leadership that has seen him become captain of one of the best national sides in the world.”

Wijnaldum has opted to wear the No. 25 shirt for the Giallorossi this season.