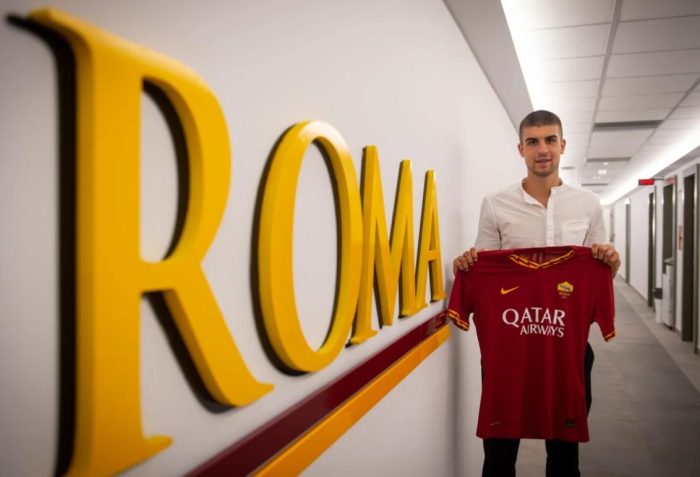 Gianluca Mancini has officially joined Roma from Atalanta. The ’96 class defender arrived at Trigoria this morning and has now been unveiled as the latest reinforcement for Paulo Fonseca. Here is the full announcement from the Giallorossi:

AS Roma are delighted to confirm the signing of Italy international defender Gianluca Mancini. Mancini, 23, joins the club from Atalanta on an initial one-year loan deal, for a fixed fee of €2 million. As part of that agreement, the Giallorossi must subsequently make the transfer permanent for an initial sum of €13 million. The complete agreement includes a number of performance-related clauses, based on the potential achievements of both the player and the club. If all are met, these add-ons are worth a maximum of €8 million.

In addition, Atalanta retain the right to 10% of any potential future profit made on the player – calculated depending on the status of the clauses and payments already made at that time. The player, meanwhile, has agreed a contract with the Giallorossi that runs until 30 June 2024.

“Joining a prestigious club like Roma is a proud moment for me, and the culmination of all the hard work put in ever since I first started to play football,” said Mancini. “I cannot wait to get started on this new adventure.”

Mancini spent the last two seasons at Atalanta, making 48 appearances for the club and scoring seven goals across appearances in Serie A, Coppa Italia and the Europa League. A product of the Fiorentina youth system, Mancini spent two years at Perugia between 2015 and 2017 prior to his move to the Bergamo side. An experienced Italy Under-21 international, Mancini made his debut for the full national team in March this year, in the comprehensive victory over Liechtenstein.

“The arrival of Gianluca allows us to boost our defensive options with a young defender that has great talent and is coming off a very impressive season,” said the club’s sporting director Gianluca Petrachi. “I am pleased that Paulo Fonseca will now have the chance to coach a young player who is dedicated to his work and has a great desire to improve further.”

Mancini becomes the club’s fourth signing of the summer to date, following the arrivals of Leonardo Spinazzola, Amadou Diawara and Pau Lopez.