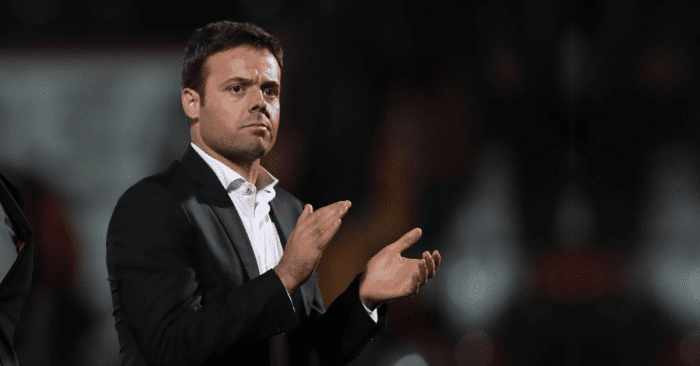 In one of the most decisive and important weeks of their tenure since acquiring the club in August, Dan and Ryan Friedkin, the President and Vice President of AS Roma, have officially appointed yet another director to the club’s hierarchy.

The Giallorossi announced late this afternoon that they have reached an agreement with Benfica’s current Director of Football, Tiago Pinto, to become the club’s new General Manager.

“I am delighted and humbled to be joining Roma at such an exciting time in the club’s development,” said Pinto to the club’s official website.

“Leaving Benfica was a very tough decision, given what we have achieved together over the past eight years, but the chance to join a resurgent Roma and to contribute to that momentum under this dynamic new ownership was a professional opportunity that I could not turn down.”

“I am eternally grateful to Benfica for their trust and support and also to Dan and Ryan Friedkin for giving me this opportunity at Roma to continue developing in the sport I love,” he concluded.

Dan Friedkin commented on the appointment of the Portuguese executive, who joined Benfica in 2017.

“Tiago is a world class talent. In our many conversations, it was clear that his passion for his job, forward-thinking mindset, and, above all, winning mentality were consistent with the new ethos at Roma,” Friedkin asserted.

“We are convinced that his remarkable energy, uncompromising ethics, and track record of identifying, developing and optimising talent will help in our ambitions as we begin to prepare Roma to compete for trophies at the highest levels of Italian and European football.”

Finally, Giallorossi CEO Guido Fienga lauded Pinto, who will officially begin his duties on 1 January 2021, and his ability to develop talent,

“Tiago Pinto is an outstanding choice to develop our footballing talent at Roma. Tiago is well-regarded for his holistic approach to developing a dynamic sporting department, and also for his track record of building an active pathway for players to graduate from the academy to the first team.”

“His energy, expertise and commitment will prove invaluable in our quest to win trophies.”