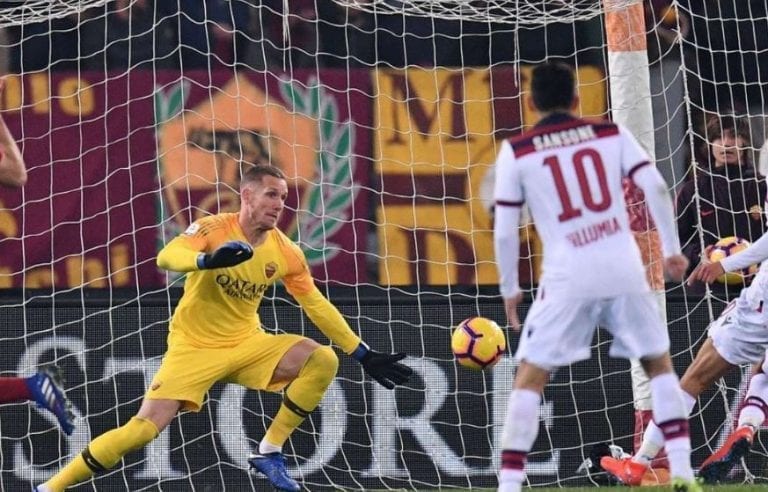 After spending so many seasons searching for a reliable number-one, the loss of Alisson to Liverpool last summer was a huge blow to Roma. He may have only played one full season for i Giallorossi, but as Liverpool fans have seen this season, it doesn’t take long for the enigmatic Brazilian to make an impression. While Roma could hardly of refused to sell Alisson when the Premier League side came in with a bid of £56 million – a figure which could rise to £66.8 million – the loss of their number-one was always going to leave a big hole in this squad.

And so began the quest to try and replace Alisson. A host of goalkeepers were linked with Roma during the summer, including a host of well known number-ones that would have ticked a box with the club’s fans. But rather than go for an established name, Roma thought outside the box and opted to bring in Swedish stopper Robin Olsen from Copenhagen for a fee of €8.5 million. Having received such a large sum for Alisson, some Roma fans were apprehensive about the relatively low price attached to Olsen, not to mention his lack of experience of playing for a top side.

Well, nearing the end of his debut season in Italy, Olsen might not have quite filled the gap left by Alisson, but he’s proven beyond doubt that there is definitely life after the Brazilian stopper. He might not be as exciting as Alisson, capable of pulling off the sort of incredible saves the South American became famous for during his short time at the Stadio Olimpico, but in terms of consistency, Olsen is getting close. And when you take into consideration the sort of season Roma are having, being able to have a goalkeeper you know will keep you in games has been a huge boost to the team.

Currently fifth in the table, a point off fourth, Roma’s hopes of achieving a top-four finish are still very much alive – which hasn’t always looked like being the case this season. With odds of around 7/4 with the latest Serie A betting of achieving a top-four finish, Roma know that they will need to be fully focused between now and the end of the campaign if they’re going to maintain their place in the Champions League next season. Olsen might not be lifting any end-of-season awards, but his influence has been instrumental in Roma salvaging something out of this season.

There’s no denying the fact that Roma have plenty of work to do in the summer if they’re going to be more competitive next season, but signing a new keeper isn’t one of them. At 29, Olsen is just coming into his prime, and the second half of the campaign has shown a goalkeeper who is capable of winning games on his own. The task for next season will be for Eusebio Di Francesco, or whoever is in charge of the team, to assemble a squad that can match Olsen and start cutting the gap between themselves and the likes of Juventus and Napoli.