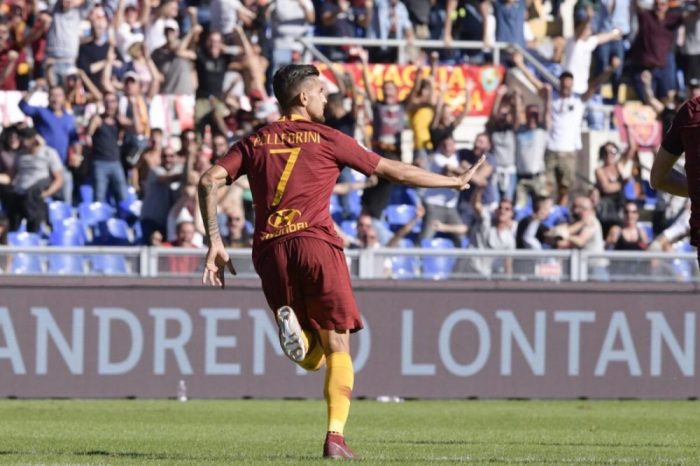 Derby hero Lorenzo Pellegrini appeared on Roma Radio this morning. These are his words:

How many seconds did you sleep last night?
Few, very few (laughs).

How is it waking up after winning your first Derby?
It’s beautiful, it’s great because it was my debut in the Derby. Winning it by scoring and the whole team playing a great game is magnificent. We had to win. In short, winning the Derby is even more beautiful than it could hypothetically be.

How long did it take to realise you were about to come on?
To tell the truth, I had no idea because it seemed like Il Flaco (Pastore) asked for a drink or something else, it did not seem like he was hurt because I think he was playing an excellent match until the moment he got injured. After that they told me: “Go to warm up”. I went, I stretched and they called me back on the bench. So maybe it was better this way.

Yesterday in the post-game Di Francesco said that during the week he told you that you could play or replace De Rossi or Pastore. On the one hand you were prepared, but maybe in a match like the Derby it is even better not to think about it?
Yes, certainly yes, as I said, there was not much time to think or warm up. The Mister had already told me that I probably would have come on. There were these two possibilities because Daniele was a bit tired and Il Flaco had just returned from injury and might not have 90 minutes in his legs. Perhaps this helps you mentally prepare.

You played in a position a little different than usual.
Definitely a different role in many respects to a mezz’ala, but in many way they’re also similar. The fact you play between the lines to accompany the attacking action. Perhaps you enter the pitch with a clearer head knowing you have two teammates behind you who can remedy things. You’re not as attached to the defensive phase – you still have to defend, though. I really like playing there, but it’s not like I can only play in one position. In midfield I think I can play in all the roles, I’m happy about this. There are things that are better for my other teammates. But I must say that I like to play there, I had already played there at Sassuolo with the Mister when there was a period with so many injuries and we were forced to change formation and I was the trequartista. I must say that I do not mind playing there.

In the moment of your goal, did you have time to think or was it instinct?
Instinct told me that I could only do that. There had been a bit of a rebound, I had Caceres immediately to the left and I saw from the corner of my eye that another defender was coming, I do not really remember who it was. So I said, “I’ll do this and hope it goes in”, and fortunately it did (laughs).