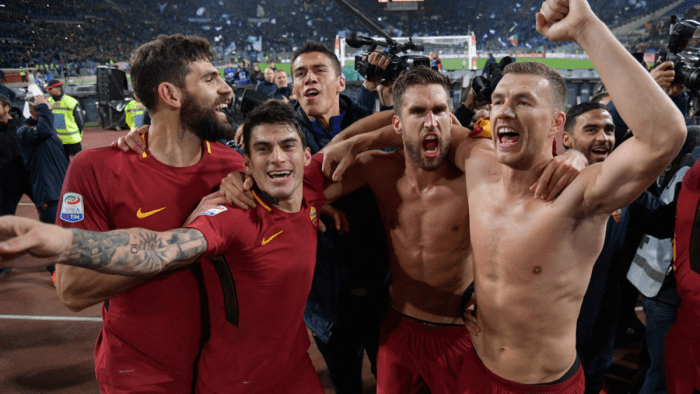 GK Alisson: 6
A very mediocre performance from the Brazilian. As he admitted after the match, Lazio’s lone goal came as a result of a “double mistake” by he and Manolas.

RB Alessandro Florenzi: 5
Certainly the Derby represented one of Florenzi’s worst performances of the season. He had trouble all evening, especially in defence. Lukaku caused him fits on the flank as nothing seemed to go right for the Italian international.

DF Kostas Manolas: 6
He and Alisson had a horrific double blunder, which led to Immobile’s penalty goal. Aside from that, a fairly standard night.

DF Federico Fazio: 8.5
The former Sevilla man was superb on the evening and didn’t put a foot wrong. He held Ciro Immobile completely in check and his aerial prowess helped curb any threats Lazio attempted through the air.

LB Aleksandar Kolaorv: 7.5
Won the penalty which led to the opening goal as he caused his ex-club major problems down the left

MF Radja Nainggolan: 8.5 (Man of the Match)
Single handedly controlled the midfield. Nainggolan was everywhere throughout the pitch and capped his brilliant performance with a goal.

MF Daniele De Rossi: 6
A steady performance for the captain, he had a few errant passes but his positioning on the evening was strong.

MF Kevin Strootman: 6.5
The Dutchman was consistent throughout the evening and helped mark Milinković-Savić, who was quiet throughout.

ST Edin Dzeko: 7
His hold-up play was, again, absolutely world class. Could have potentially had a headed goal in the first half, though, it didn’t come to fruition.

LW Diego Perotti: 7.5
Was by far the Giallorossi’s greatest attacking threat throughout the match and was rightfully awarded with a goal.

Manager Eusebio Di Francesco: 7.5
Roma’s manager continued his steady and consistent display as a tactician. He caused Lazio problems with his high press and was smart with his substitutions.

RB Bruno Peres: 7
Peres came on for Florenzi and was stronger. Lukaku seemingly disappeared once the Brazilian entered.

RW Gerson: 6.5
The youngster had a steady cameo appearance, nearly created a goal.

Marash Kumbulla pursued by several Serie A teams
| 28 May, 2022
Milan rumoured to have joined race for Nicolò Zaniolo
| 28 May, 2022
Ex-Roma president Rosella Sensi: “The Friedkins have reawakened Roma. Dan Friedkin’s invitation moved me.”
| 28 May, 2022