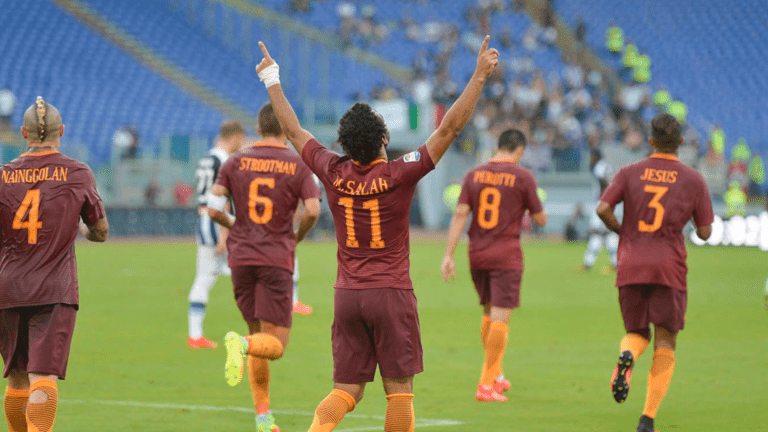 Roma opened their Serie A season in stunning fashion as they stomped Udinese 4-0 at the Stadio Olimpico, here are our ratings for the match:

Szczesny: 6.5
Hardly ever called into action. It was a rather boring night for the Polish international, however, he was fine when called upon.

Peres: 6
You could certainly tell Peres was making his debut after only a few training sessions. There seemed to be a few miscommunications with his teammates, something that should easily be eradicated as he continues to understand his teammates.

Manolas: 7
Another fine performance from the Greek. Manolas contained Duvan Zapata and was hardly ever threatened.

Vermaelen: 7
After a foolish red card against Porto, the Belgian did all in his power to erase his poor debut. Vermaelen was quietly fantastic in defence after having to provide cover for Emerson, who was caught out of position of a couple of occasions.

Emerson: 5.5
The Brazilian certainly left more to be desired from the Brazilian. After a rather poor performance against Porto, Emerson didn’t do much to atone for his poor display.

Nainggolan: 6.5
As always, the Belgian provided reliability and grit in the middle of the pitch.

Paredes: 7.5
What a performance by the Argentine. Paredes played his role perfectly, attaining a 93% pass accuracy and recovering 6 balls. Had it not been for Perotti, you could easily argue the Argentine deserves the the “Man of the Match” title.

Strootman: 6.5
The Dutchman continues to impress on his way back to top form after two devastating knee injuries, as the ex-PSV had another fine display, following up his good showing against Porto.

Salah: 7
While he certainly must improve on his understanding the Bruno Peres, the Egyptian had a very strong opening match, which was highlighted by a goal to open his account.

Dzeko: 8
A very strong performance by the Bosnian. Dzeko was a menace for Udinese the entire evening as he unleashed 5 shots, 3 of which were on target, and won a penalty for Roma. The ex-City man was finally rewarded for his hard work as he scored a tap-in to cap off a phenomenal display.

El Shaarawy: 6
An average performance for the former Milan man. El Shaarawy had a brilliant chance to put Roma up 1-0 in the first half but shot it straight at Udinese’s Karnezis. There was certainly more he could have done, but regardless, it was a decent shift by the attacker.

Perotti: 8.5
The Man of the Match. The Argentine buried two goals and clearly changed the attacking dynamic of Roma after a stagnant first half attacking display.

Juan Jesus: 6
Replaced Emerson and certainly brought more compactness to the back.

Fazio: N/A
Played only 10 minutes and did not make much of an impression.