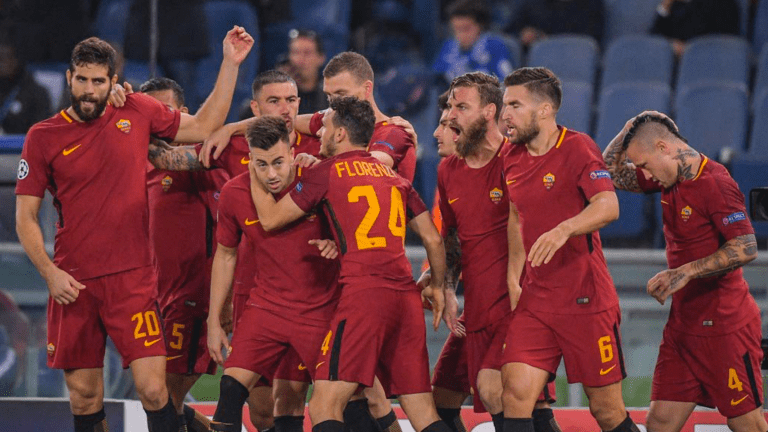 GK Alisson: 7
The Brazilian was absolutely fantastic, again. He was up to the task when called upon and did well to stop Eden Hazard’s shot just minutes after Roma took the lead in the opening minute.

RB Alessandro Florenzi: 8
The Italian international had a tall order in front of him by being asked to contain Eden Hazard. Florenzi, though, was not at all fazed by the matter and was a rock in defence as well in attack.

DF Federico Fazio: 7.5
The former Sevilla man continues to impress as he was, once again, a rock at the back.

DF Juan Jesus: 6.5
Had a few mishaps in the first half, especially while in possession, but was steady in the final half hour to help ensure all three points.

LB Aleksandar Kolaorv: 6.5
Nearly gifted Alvaro Morata a goal, but he was strong on the left flank.

MF Daniele De Rossi: 6
It was a tale of two halves for the captain. De Rossi looked slow and overmatched in the opening half, however, really picked it up in the second half and was much better.

RW Stephan El Shaarawy (Man of the Match): 9
The Man of the Match. El Shaarawy secured his first Champions League brace and made ex-Roma man Antonio Rudiger and David Luiz pay for their respective errors. El Shaarawy was absolutely ruthless down the right flank and gave Marcos Alonso nightmares.

ST Edin Dzeko: 7.5
Dzeko won’t get the deserved plaudits, but his hold-up play was absolutely world class. His perfectly placed headed ball lead to El Shaarawy’s wonder goal while his now-viral move of drawing all three Chelsea defenders and setting up of Diego Perotti should have led to another goal.

LW Diego Perotti: 7.5
His dribbling was silky throughout the night and was topped off by a sublime strike. The Argentine should have had another goal after being handed a golden opportunity compliments of Edin Dzeko.

Manager Eusebio Di Francesco: 8
The Roma Mister did as he promised, high pressing and organised defending. Di Francesco didn’t really alter the Giallorossi’s approach from their first meeting against Chelsea, but everything worked. Roma were intelligent while in possession and were lethal and extremely dangerous in nearly every counter attacking opportunity.

MF Gerson: 6
The Brazilian didn’t do anything outstanding but you can tell he’s certainly improving, he was steady.

DF Kostas Manolas: 6.5
The Greek, who was coming off an injury, was tidy in defence, however, had an opportunity to score on a free header, but it was saved by Courtois.