Press conference, De Rossi to leave Roma at the end of the season 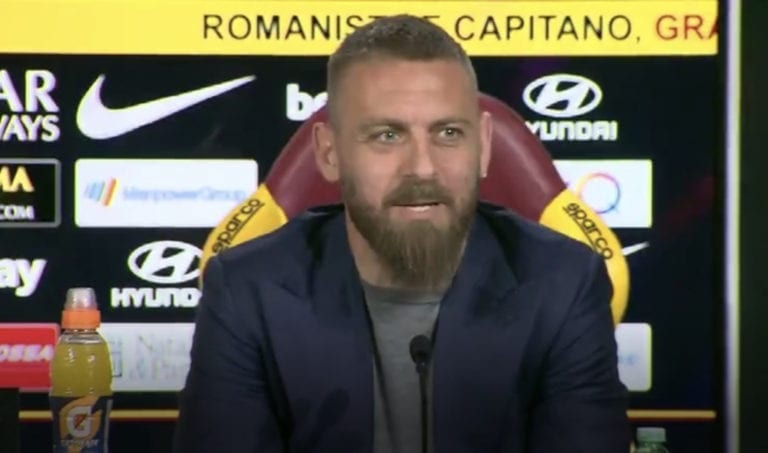 Daniele De Rossi held a press conference at Trigoria today following the announcement that he would be leaving Roma at the end of the season upon the expiration of his contract. These are the words of the Roma legend:

Roma CEO Guido Fienga begins: “Yesterday I met with De Rossi and I told him about the club’s decision not to renew his contract as a player. I expressed our desire to give him a new role within the club that he wants. It’s up to him and if he wants to accept”.

De Rossi: “There some things I would have liked to have changed in my career with a magic wand such as more trophies on the mantel, but wearing this shirt isn’t one of them. The supporters always made me feel loved, and I tried to repay them by choosing Roma, but really we chose each other”.

“I understood the direction club have taken towards me, I am 36 years old and I understand football, but I didn’t want to distract myself and the team from the Champions League race. I thank the executives for the offer, there is great respect there but I still feel like a footballer. Clubs have to make decisions, so I understand”.

Fienga intervenes: “I’m sorry to not have told De Rossi about this sooner. But this is all a result of the shock that has come this season. We’re absolutely aware of our mistakes.”

De Rossi: “I get the feeling that I’d like to be a manager. We’ll see in the future if I can manage this club, but now I have to take my own path. I want to play and that’s not what they want, so some day I will speak to the President without any problems. Fienga said I would be a good director, but if it were me, I would have advised him to renew my contract, but there’s nothing I can do about it”.

“I thank God for the career I’ve had. I would have been happy if I’d manage to emulate my father’s career, in Serie C. He’s my idol. When I was 14 or 15, it did not look like I would ever become as good as I did.”