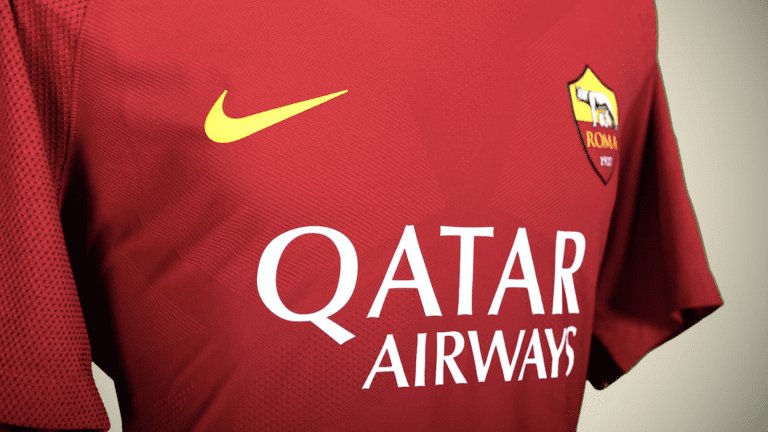 After having been without a main sponsor since the 2013-2014 season, Roma announced today the agreement of a multi-year contract with Qatar Airways to be the new main sponsor of the club.

Here is the full announcement from the club:

AS Roma and Qatar Airways are delighted to announce a multi-year partnership that will see Qatar Airways become the club’s official shirt sponsor.

The sponsorship, the largest ever signed by the club and one of the biggest ever agreed by an Italian football club, will see the airline’s logo adorn the front of the first team’s shirts until the end of the 2020-21 season.

Launched in 1997, Qatar Airways is one of the youngest global airlines to serve all six continents and connects over 150 destinations on the map every day. One of an elite group of airlines worldwide to have earned a 5-star rating by Skytrax, Qatar Airways was voted Airline of the Year in 2011, 2012, 2015 and 2017.

Under the terms of the deal, Qatar Airways becomes Roma’s Main Global Partner and will be only the seventh shirt sponsor in the club’s 90-year history.

Formed in 1927, Roma is one of Italy’s most successful football clubs, winning three Serie A titles, nine Coppa Italia crowns, and regularly competing in the UEFA Champions League.

The new partnership will enable Qatar Airways to engage with the club’s 263 million fans worldwide and help Roma reach millions of potential new fans across the globe.

“We are delighted to announce this historic partnership between AS Roma and Qatar Airways, two great brands with global ambitions,” AS Roma president Jim Pallotta said.

“Today’s announcement is the result of discussions behind the scenes for over eight months with Qatar Airways, led by our commercial team in London with much assistance from the entire Roma team, and comes at a significant time in the club’s history, on and off the pitch.

“With a new stadium due to begin construction late this year and the team in the Champions League semi-final for the first time for 34 years, it’s an exciting time to be a Roma fan. We shall be proud to wear the Qatar Airways name on our shirts and we look forward to working together to achieve sporting and commercial success for many years to come.”

Qatar Airways Group Chief Executive Officer, His Excellency Mr. Akbar Al Baker, said: “We are very pleased to announce this new partnership, which will see Qatar Airways become the official shirt sponsor of AS Roma through the 2020-21 season.

“AS Roma is one of the most successful and well-known football clubs in the world, and our shared passion to strive for excellence and innovation make this a natural partnership. As an airline, we understand the power of sport in bringing people together, and our new partnership with AS Roma further underscores this belief. We look forward to working together and celebrating with AS Roma fans all over the globe.”

The agreement also further strengthens Qatar Airways’ commitment to Italy. The airline currently flies twice a day to Rome and Milan, as well as daily to Venice and Pisa. Qatar Airways last year announced the acquisition of 49 per cent of AQA Holding, the new parent company of Air Italy.