Ranieri: “As a manager, I can say that there’s a great set up here, Roma is a great club that is on the up”. 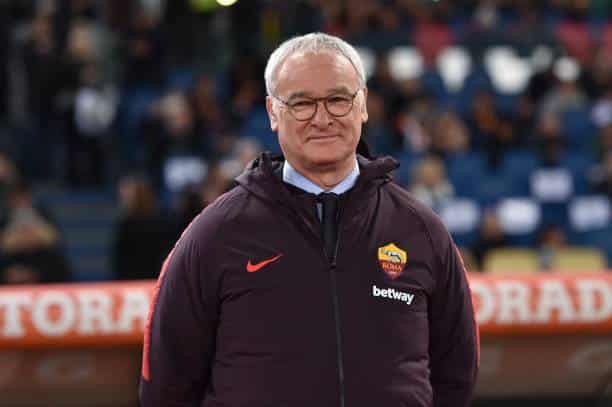 Roma manager Claudio Ranieri was interviewed by the club’s official website today ahead of this weekend’s final match of the season against Parma. These are his words:

Claudio, after three months back in Rome, your final game in charge will be on Sunday. How has it been for you?
Overall, I feel positive. When I arrived here, there was a sense of disappointment around the team – the boys were downbeat because they had high hopes. I must say that here at Trigoria, I’ve had everyone’s support, including that of the team – they’ve been able to react, demonstrating positivity and desire. Nobody can come in and wave a magic wand. In the first game, we were rather lucky against Empoli, then we had the matches against SPAL and Napoli. From then on, our tactical strategy has been tweaked. I needed to make the defenders feel better protected and, little by little, things have improved for us. This team has a positive future, because there are young and talented players here. I’m sure they will do well.

What are the positives? What has disappointed you?
In terms of positives, I think of the defensive solidity we have, which was previously lacking. One negative is the goal we conceded in stoppage time against Genoa, even though Antonio Mirante made that crucial save minutes afterwards. Plus there’s the game with Sassuolo, where we created more chances than we have in any other game but failed to score. There’s still a remote possibility that we get a Champions League place. We’ll need to score five and see what happens in the other matches. We’ll do our best. That’s the sort of person I am – I never give up and always strive, until the very end. If we don’t manage it, credit to the other teams.

You came in late in the season. How much has that impacted the type of football you’ve opted for in recent weeks?
When you arrive during the season, towards the end of the campaign, everything has a bearing. As a coach, I demand organisation and balance, from a tactical perspective. All those things affect the way that I see football. Of course, I also like being able to press forward, and then drop back into position, for 90 minutes. I think it’s better not to hold too much possession, because then the other team sits back and then you have to try and open up their defence. Also for those reasons, I always try to play with pace. I know that it’s not easy to play the football I want, so I’m happy with how my players have done.

You’ve often changed formation, which shows that there are many ways a team can set up to implement your footballing ideas…
I started changing my set-up when I was coaching Cagliari in 1990. After the first round of games, we were dead last in the league and everyone thought we were down. At the time everyone was playing 3-5-2 and only Arrigo Sacchi’s Milan side played a 4-4-2 formation. In the second half of the season, I regularly switched between 3-5-2 and playing zonally, and we managed to survive with one game left to play. I like to make changes, but it always depends on the team and the amount of work you can do with the lads. This team was already highly intelligent and able to adapt. The fact we’re still in the hunt in the last game of the season is because of the good work that was done before. If nothing really comes of it, that’s fine – that can happen some seasons. That’s the way football is.

Which match will you remember most fondly?
Perhaps the game against Juventus – that was great. Mirante did make three outstanding saves but that’s what a goalkeeper is there to do. How many did Alisson make last season? We capitalised at the right time and managed to win the game, making our fans at the Stadio Olimpico very happy.

Which player are you most satisfied with in terms of their improvement?
I think [Federico] Fazio and [Steven] Nzonzi have shown how good they are. We were already aware of Federico’s ability, but Steven hadn’t yet won over the fans. He’s a player I tried to get when I was at Leicester, when N’golo Kante left. The fact he knew I rated him perhaps gave him that boost to show what he’s made of. He always plays with two touches and he’s like an octopus in the way he’s able to win the ball back. He needs to improve his forward passing but he’s a player that doesn’t take too many risks and plays for his team-mates. He reminds me of Thiago Motta at Inter. He always knows where he is, remains calm and makes himself available to the team. I think he’s been a great purchase for Roma.

Is the match against Genoa the one that leaves you with most regrets, given how that one played out?
Yes – that’s the one. It wouldn’t have been an easy one to win – we found the opening we needed to get the goal, but then conceding from a set piece, given the qualities of our defence, was really disappointing. It would have given us momentum going into the match with Juventus, with the fans even more up for the game. With those two points we’d have had a better chance of getting into the Champions League too.

Speaking after the last match, you spoke of a Roma side that may not be ready next season to compete for a Champions League place…
We’ll need to see how the team changes next year and find out which manager is coming in. This team is still fighting, in a season that hasn’t gone well. I don’t want to put pressure on my successor – that would be too easy. What I mean is this is a good team, which has always got into the Champions League in recent years. If we say the next team should go for Europa League qualification, we’re keeping a lid on expectations. Should the team then have a good season, getting into the Champions League, then that would come as a nice surprise. That’s the way I’ve always been. I think it’s better not to raise fans’ expectations and, as a result, those of managers, the club and everyone around it.

If we manage to qualify for the Champions League in the game against Parma, obviously that will bring in more money for the club. The club has always been clear that they want to keep the balance sheet in order and I think that’s right. When I came back here, I saw lots of changes, compared to the last time I was coach – it shows that money has been spent and things have been done in the right way. Obviously fans aren’t concerned by all those things behind the scenes – all they care about is seeing their team fight out on the pitch. It’s fair for a fan to think in those terms. As a coach, I can say that there’s a great set up here, a great club that is on the up.

How emotional will it be on the bench for your last match as Roma coach?
Every time I’m in the Roma dugout, I get emotional. I always arrive out on the pitch after the anthem, because otherwise I get too emotional. I want to stay cool and have a clear head. Since it’s my last game, I must thank the club president, who gave me the opportunity to guide the team I love once again.

It will also be Daniele De Rossi’s last game for the club, will that make it even more emotional?
It will be for him, as it will be for the fans, who’ll be seeing Daniele for the last time with the captain’s armband and Roma shirt out on that pitch. Every fan has identified with him, because of that desire and fighting spirit he’s always shown. I hope we see a loving farewell for him.

What has it meant for your career, during which you achieved one of the greatest feats in modern football, to come back for these three months with Roma?
Roma mean everything to me. Which fan wouldn’t accept the opportunity to manage the team they love, even for just one game? I got the call at a difficult time. Had it been another team, I’d never have said yes – I would never have taken such a risk. Can you imagine, had we carried on losing after the matches against SPAL and Napoli? I would have had all the criticism. I thought all of those things, but love takes you beyond cold and practical reasoning. I agreed to take this risk. My whole career has been like this – before Leicester I finished second with Roma, Juventus, Monaco, but those are teams I arrived at in times of difficulty. A team has never been built around me as the coach.

What differences to you see currently between Italian and English football?
The differences are down to many different factors. The Premier League generates huge amounts of money. For our part, we’re too anchored in tactical matters, which slows the game down. When a player comes over from there, they don’t perform right away in Italy. You need time to build up an understanding of Italian football – being half a metre further forward, getting that diagonal ball right.

In England, Spain and France people are less rigid. In the Premier League, they love the competition and teams have to fight from minute one to minute 90. They train less there than in Italy, but everything is done at full throttle. In the training games they really go after each other. That’s the spirit that the fans want to see – they want to experience those emotions, which can only come with players running after and fighting for every ball.