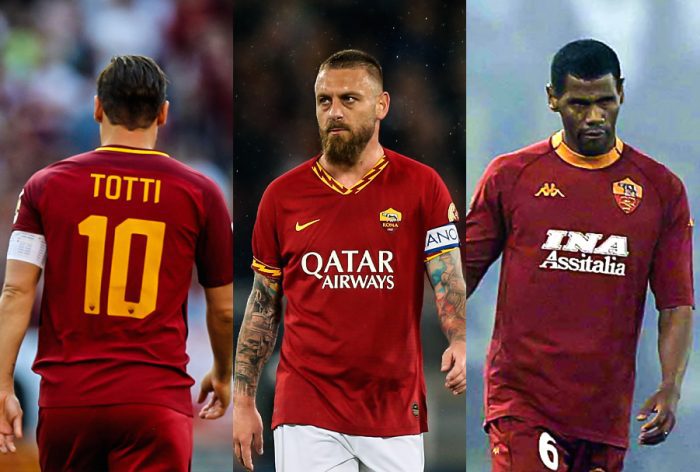 One of the most prominent clubs in Italy, Roma have never short of amazing players who provided great sporting moments for everyone to cherish. Founded in 1927, the club carries a rich tradition and heritage and remains one of the most recognisable names in all of football—thanks, in part, to the bevy of world class players that have passed through the Italian capital.

Who Are the All-Time Legends of Roma?

The Giallorossi have captured the Serie A title three times, the Coppa Italia nine times along with two Italian Super Cups. Certainly they don’t possess a trophy cabinet as decorated as their northern rivals Juventus, Milan, and Inter—but Roma is known to be home to some of the most loyal players throughout its history.

Widely regarded as one of the best Italian goalkeepers of his generation, Franco Tancredi was also one of the best AS Roma players of all time. Tancredi played for AC Milan and Rimini before joining Roma, where he stayed for 13 years from 1977 to 1990. Tancredi made 289 appearances for the Giallorossi and helped them win 4 Coppa Italia titles and 1 Serie A title.

Aldair Nascimento Dos Santos is one of the greatest defenders in the history of both Brazil and Roma. Joining the Giallorossi in 1990, he stayed there for 13 years, even becoming their captain. He made 436 appearances and remains the most capped foreign player in the club’s history. Aldair won 1 Serie A, 1 Coppa Italia, and 1 Italian Super Cup with the club.

A natural-born defender, Giacomo Losi played his entire football career at AS Roma from 1955 to 1969. Donning the jersey for 14 years, Losi made 455 appearances, a record he held for 38 years before Francesco Totti broke it in 2007. Losi was popularly called the ‘the Heart of Roma’ for his technical abilities and loyalty to the club, where he won 2 Coppa Italia titles in 1964 and 1969.

Giannini is widely acclaimed as one of the best Italian midfielders of his generation and is also an AS Roma legend. He spent 15 years at the club and is the club’s 4th most capped player with 437 appearances. Nicknamed ‘The Prince,’ Giannini scored 75 goals for the club, winning them a Serie A title and 3 Coppa Italia titles in the process.

Before the arrival of Giannini, De Rossi, and Totti, Agostino was the symbol of Giallorossi. He scored 69 goals for the club over 15 years, where he won 3 Italian Cups for them and their 2nd Serie A title in 1983. A renowned midfielder who could also play in a sweeper position, he was widely known for his brilliant playmaking.

Amadeo Amadei is widely known to be one of the best AS Roma players and one of the best Italian strikers of all time. Amadei scored 111 goals for the club and holds the record for being the youngest player to play in Serie A at 15 years 280 days. Amadei guided the club to their first Serie A title in 1942 and is a AS Roma Hall of Fame member.

Pruzzo played 315 matches, scored 138 goals for the Giallorossi, and was the prolific goalscorer who won them the Serie A in 1983 and 4 Coppa Italia titles. Pruzzo is one of the most successful Roma players of all time and is hailed as one of their best players ever.

One of the best wingers of all time, Conti appeared 402 times for the club and scored 47 goals winning them the Coppa Italia 5 times and the Serie A in 1983. Regarded as the best Italian right-winger due to his brilliant pace and technique, Conti is hailed as one of AS Roma’s legends.

Undoubtedly one of the best players for AS Roma, De Rossi is a true symbol of the club and widely regarded as one of the best midfielders ever. He spent 18 seasons with the Giallorossi, where he made his debut in 2001 and is currently the second-most capped player at the club with 616 appearances. De Rossi won 2 Coppa Italia titles and 1 Italian Super Cup with AS Roma and also led them to their first Champions League semi-final in 2018.

An attacking midfielder who could also play as a lone striker or winger, Francesco Totti stands as unarguably the greatest legend in the entire history of the Giallorossi. He spent 28 years with his boyhood club and went on to make a record of 786 appearances for the senior team besides appearing for three years with the youth team. Totti is also the club’s top goalscorer with 307 goals and won a Serie A title, 2 Coppa Italia trophies, and 2 Italian Super Cups.

As you can see, there’s no shortage of world class players that have donned the Roma shirt during their careers. And with the club currently being led by Jose Mourinho, it’s increasingly likely we could see another emerge soon.