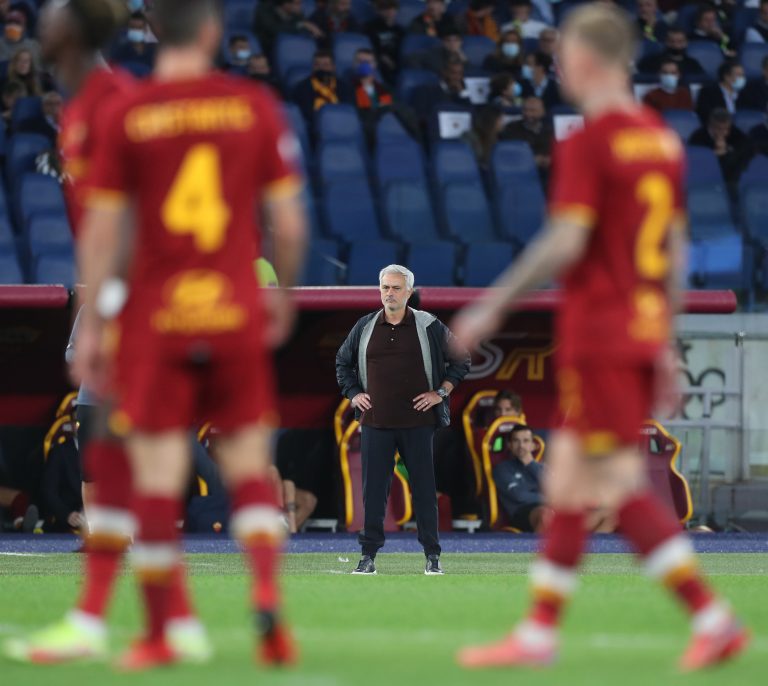 Roma ended Napoli’s perfect start to their Serie A campaign, holding the Partenopei to a 0-0 draw this evening in the Italian capital.

The Giallorossi came close on multiple occasions but ultimately failed to find the back of the net despite outplaying Luciano Spalletti’s men.

Attacking pair Tammy Abraham and Lorenzo Pellegrini came close to scoring in the early stages of the clash while defender Gianluca Mancini missed a late headed chance with both sides having to settle for a scoreless draw.

Although they were held to only one point, Roma manager Jose Mourinho will feel encouraged by the display following Thursday’s loss to Bodø/Glimt.

“It was a good match,” began Mourinho in his post match interview with DAZN. “Perhaps my feelings are different than yours, but that was an incredibly high-level game of football.”

“Given the pressure, 0-0 seems like a decent result. It was an intense game of football where the concentration level was incredibly high. Nobody played scared but each team respected the opponent.”

“Veretout and Cristante provided good coverage in the midfield. We had Pellegrini drop a bit deeper today because of the way Fabian Ruiz plays, but this was an intense match. We had chances and they had theirs.”

The match also saw both managers sent off with Mourinho receiving a double booking while Napoli boss Luciano Spalletti was shown a straight red card.

“I don’t know why I was sent off. I didn’t say anything particular, though, I will say the referee had a very balance performance. Neither team will leave tonight feeling happy.”

“When you have a shit performance like we did on Thursday, the next match is always difficult from an emotional point of view. There’s a different sort of weight to the game.”

“It’s not easy playing against Napoli and we tried to win it until the end. Both clubs recognised the quality of the other and it led out to an intense game. Even I’m tired just from being on the bench.”