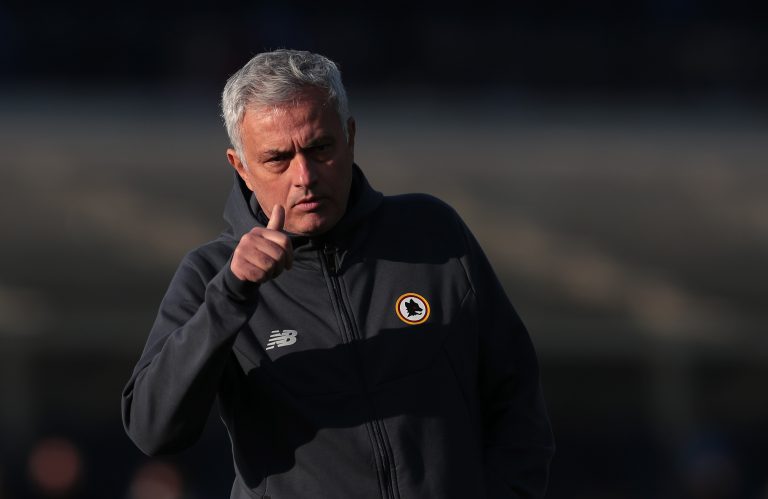 Roma boss José Mourinho was all smiles at full-time after his side dismantled a surging Atalanta 4-1 this afternoon in Bergamo.

It was an incredible yet unexpected result for Roma, who hadn’t won in Bergamo since matchday one in 2017, and gives them a much-needed boost ahead of the winter break.

The win also means Roma finally end their winless streak against Serie A’s “big five”, whom they’ve struggled against over the past three seasons.

A brace from Tammy Abraham in addition to goals from Nicolo Zaniolo and Chris Smalling, the man of the match, secured the capital side all three points in what was arguably the team’s best performance in nearly three seasons.

“The spirit was fantastic today,” Mourinho said to DAZN.

“The team knew you can’t control Atalanta for all ninety minutes, you have to suffer a bit. But we were strong from every point of view. I must congratulate my guys.”

“When you face a team that’s on this level such as Atalanta, it’s not enough to just simply work on tactics and organisation, you also need character, which is what the players showed today.”

He continued, “Everyone sacrificed today. Mkhitaryan had a lot to do defensively while guys like Zaniolo pressed well. I really liked what the team did. We weren’t uncomfortable even during the difficult moments.”

“Going back to Zaniolo, I think the goal is important for him. He was able to stay balanced even after missing a chance. I liked how he kept his emotions in check.”

“The same for Tammy. I’ve never been worried about him scoring, my only concern was how he would interpret the spirit of a team that doesn’t dominate within the league.”

“He comes from a culture where the team always has the ball and is always superior, he plays well and scores goals. For us, though, a striker must do other things beyond scoring.”

“It was important for us to have a guy who could win their duels today, especially when we were in a low block. He needed to win those duels against Toloi and Palomino, and he did…he’s really grown from this point of view.”