Roma boss Paulo Fonseca ahead of Europa League semi-final: “It’s a big opportunity for the club.” 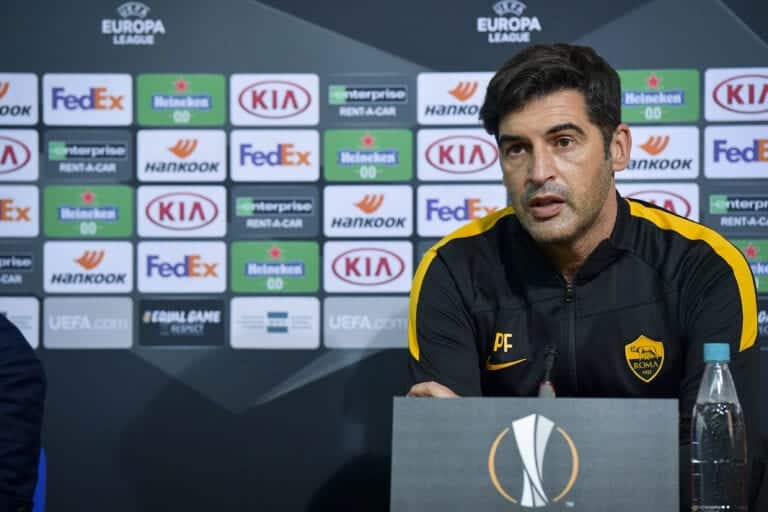 Roma boss Paulo Fonseca appeared on ESPN and gave a lengthy interview as his side prepares to face Manchester United tomorrow in the Europa League semi-final.

The Portuguese tactician admitted that the double-legged affair is an important opportunity for Roma, who enter the tie after eliminating Ajax.

“We’re excited, it’s a big opportunity for the club first and foremost, but also for the city and for the players. Not everybody gets a chance to face Man United in a European semifinal,” he began.

“This season has been a new experience for me, it was difficult to manage all of the situations we had to deal with. The injuries are especially so difficult to manage, particularly because they came in crucial moments — like [the one suffered by] Mkhitaryan. And, of course, we’re playing every three days.”

“I’d also add that Serie A is a tough, competitive league, where we’re fighting with seven other clubs for a place in the top four… and we were in the top four until the latest injuries in March, and we dropped out. So this trophy, for us, is so important.”

When asked about his tactical approach, Fonseca conceded that he isn’t a fan of sitting deep and hitting on the counter-attack. Rather, he prefers his side to take the initiative while utilising a high defensive line – though, he admitted that it does come with risk.”

“I don’t like playing deep and waiting for the counterattack. Sometimes it can happen in moments with my team, like it did against Ajax in the previous round, but it is not my style of play.”

“Defensively this season, we’ve conceded a lot of goals not because of what the other team has created, but because of our mistakes, losing balls in the first phase of play. And I think we paid more dearly for those mistakes than is normal, and that has been our biggest problem. Because yes, this type of game that we play can be risky, but in the long run I believe it is successful.”

“For United, though, they have so many quick players such as Rashford, Greenwood, and Daniel James. They can decide a game with a single situation, so we’ve got to be prepared. However, I have to confess that we can’t just go there to defend.”

Before concluding, Fonseca also gave his verdict on the failed Super League endeavor from last week, which included three fellow Series A clubs.

“When I saw the news, at first I was very worried, but now I’m very proud — proud to be part of football. I think we gave a big example to the world, to society. The most important thing is supporters. I understand the biggest clubs want more money, but they’re also the ones spending the most money,” he said.

They’re the ones paying 100 million euros for players. And this creates a problem for smaller clubs. It’s egotism on their part. So I thank the supporters, the players, the coaches, everybody who stood against this. If the Super League had happened, it could have killed real football.”

He added, “And I think to what happened in England — seeing the supporters on the street, making their voice heard, and it was amazing. I am so proud of them, and I have to say thank you.