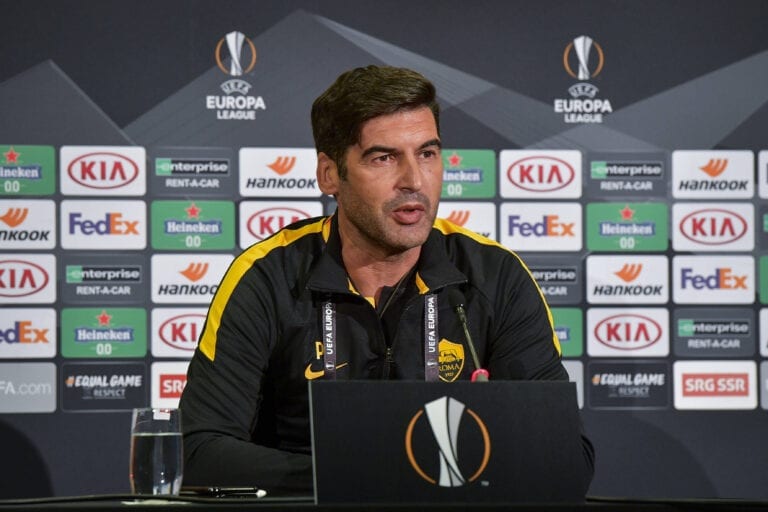 The Portuguese tactician revealed that Chris Smalling will make his return and season debut after having overcome a knee sprain injury, which he suffered after completing his return to the Giallorossi during the final minutes of the transfer market.

“Smalling will start tomorrow. Clearly he is an important player for us, but the fact we’ve conceded goals in recent games is not down to one player. We need to look at things as a team,” said Fonseca.

“Mayoral? Borja is a young player that obviously needs to learn and adapt, but I have confidence in him. He worked hard against Young Boys, which was a tough game for us. But it’s natural that he’ll need a bit of time to adjust.”

“We need to make sure we have the right attitude tomorrow. We need to be sure our approach is right, so we don’t give them confidence and allow them to get into the game.”

Fonseca also touched upon some of the issues that the Giallorossi had in their 3-3 draw against Milan on Monday evening.

“We didn’t defend well on the set pieces against the Rossoneri. We can do better. The most important thing, for me, is to see the team doing well and has confidence — we did well against Milan. We need to do better in not conceding but I think we played well.”

Meanwhile, Dutchman Rick Karsdorp stepped to the microphone and was asked about his return to the Italian capital this summer after having spent the last season on loan at Feyenoord.

“I’m really happy to be here and playing here. When I came back in the summer I had the opinion that I could play for this team. Of course I still need to improve, but I am happy to be part of the squad,” he said.

“The competition with Peres and Santon for a place? If you play for a big club it’s normal you have two or three players fighting for your position. It’s better to have that competition.”

Karsdorp was also asked about an interview that he gave last year to Dutch media during his loan spell with Feyenoord. In the interview, the defender described the conditions at Roma during his first two seasons as “shocking” and heavily criticised the club for the way they handled his injury.

“I think there was a translation error in that interview,” admitted Karsdorp.

“When I rejoined Feyenoord on loan, I wasn’t happy to leave Rome. All I said in that interview was that it wasn’t easy for me as a young, Dutch footballer to move abroad to Italy. All I said was that it was easier to be back in Holland and being able to speak the same language as my teammates. However, things are much different today at Roma than in my first few seasons.”