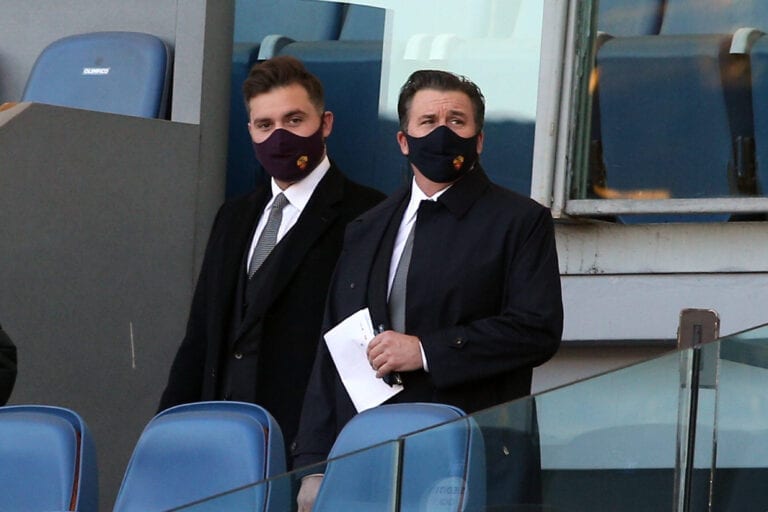 RomaPress – The busiest period of the Friedkin era at Roma is set to commence in the coming weeks.

On the pitch, Giallorossi face-off this evening in Bergamo against Atalanta then host Cagliari at the Stadio Olimpico on Wednesday before beginning their holiday break.

Off the pitch, though, owners Dan and Ryan Friedkin continue to work on a number of fronts while remaining a fixed presence at both Trigoria and the Stadio Olimpico.

One of the main priorities that the American duo were forced to address upon their arrival was the situation regarding the club’s shirt manufacturer. Roma announced in July, while still under the control of James Pallotta, they have decided to prematurely terminate their agreement with Nike upon the completion of this season.

Since September, Ryan Friedkin, board member Marc Watts, Roma COO Francesco Calvo, and two members of Friedkin’s senior legal counsel have led the club’s search for a new kit supplier. After multiple rounds of meetings with a number of organsations, including Adidas, Under Armour, and Castore– Roma are set to close a deal with New Balance.

A source from The Friedkin Group has informed RomaPress that New Balance will pay a smaller base amount (around €4 million annually with bonuses included) for the sponsorship than the previous deal with Nike. However, the club will earn a “significantly larger percentage” of retail and consumer sales, which was Roma’s biggest complaint with the Nike contract.

Meanwhile, the Friedkin’s are also looking in familiar territory for potential reinforcements on the pitch. As initially reported by the MLS official website, the Giallorossi are indeed in advanced negotiations for FC Dallas fullback Bryan Reynolds.

Initial discussions began in early November but accelerated when Dan Friedkin returned to the United States during the week of November 23rd. Friedkin and a member of his legal team met with executives from FC Dallas, whose stadium is sponsored by one of the Friedkin Group’s subsidiary companies, via videoconference.

Other clubs have expressed their interest in the 19 year-old — however, the internal belief at Roma is that Friedkin’s close relationship with the MLS and Hunt Sports Group, the owners of Dallas FC, will give them the edge that ultimately leads the player to the Italian capital.