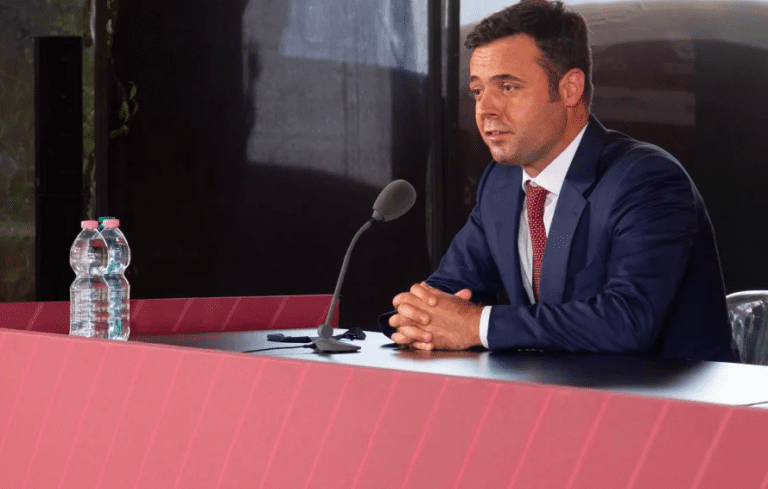 Roma formally unveiled two of their four summer signings to the media early this afternoon: attacker Eldor Shomurodov and left back Matias Viña.

The pair were joined by Roma executive Tiago Pinto, who explained that both player’s profiles are perfectly aligned with the club’s project.

“I like having these introductions a few weeks after a player arrives because you’ve already had the chance to see them on the pitch,” began Pinto.

“These two possess profiles that are in-line with Roma’s project: they’re young players with bright futures. I’ve know Viña for awhile, he’s only 23 years-old yet already has five titles.”

“I think we could also see him play with Spinazzola in the future, it’s not fair to say that’s he’s a substitute. As for Eldor, he arrived in Italy last year and we realised that his characteristics could be very important for the team.”

“This task (of acquiring the players) was split between myself, the scouts, and the manager. It’s important when we acquire a player that we select jointly.”

Viña was the first to address the media, two days after making his league debut against La Viola.

“Good day, everyone. It’s true that I’ve been lucky enough win a lot early on in my career. The secret is taking things match by match without being obsessed about the results.”

The defender then was asked about his transfer to the Italian capital, just eighteen months after joining Palmeiras.

“I was with Palmeiras when I heard about Roma’s interest. and even spoke to Mourinho. Then I arrived here and had to observe the quarantine period before I was able to train, but I’m very happy to be here.”

He continued, “There’s obviously a lot of changes when comparing Italian football to South American football, especially tactically. Physically not so much, I’m used to aggressive football.”

“I’m quickly getting used to what the manager wants and gaining a better understanding of my teammates.”

Finally, “I come from South America, where the supporters are intense and you can feel it on the pitch. This helps a player perform beyond his abilities. Seeing the supporters in the stands was sensational, every players like this.”

Attention then turned to the 26 year-old Eldor Shumurodov. The attacker, who registered an assist in his league debut on Sunday, joined the club on a permanent deal from Genoa earlier this month.

“I’m eager to prove my worth and win something for Roma and for the city of Rome. From a tactical point of view, I can play several roles, so playing alongside Tammy (Abraham) is no problem.”

“The most important thing is what’s best for the club, but I can’t wait to play alongside him.”

He added, “As soon as I heard about Roma’s interest I immediately said yes because of how important this club is and its history.”

“Mourinho is also one of the reasons why I decided to join, he’s one of the best in the world. My first objective since coming here is proving what I’m capable of.”

“Perhaps I’ve already shown a bit more than expect, but I still have to improve in several aspects in order to give our supporters joy,” he concluded.