Roma’s Board of Directors meets

Roma’s Board of Directors met today and discussed a variety of issues, though, the main concern of the meeting was seeking approval of a €120 million capital increase. This motion was ultimately approved by the Board at 18.00 CET, though, here are notable highlights of the meeting:

Shareholder Fabio Palma: “Finally, the budget has increased. We are not Real Madrid and we do not have large €200 million budgets. We should find players around the world how Napoli did, they were built with little money. Look at Hamsik, Cavani, Lavezzi, who were not players ‘worthy of Roma’. We spend €30-€40 million for players who are not ready. It is difficult to make a leap in quality if you buy these types of players. We also would like a sponsor, which is still missing. Why is that? Why is our deal with Nike for so little. I don’t expect €80 million, but Nike regards us as Ann average team, even though we’ve finished high in the table. The training staff also leaves much to be desired, injuries have become a certainty here.”

Shareholder Franco Angeletti: “For the umpteenth time, the president of the club has not appeared at this meeting, we do not even know him. The club’s budget, once again, closes in the red. Revenues dropped drastically. Why was so much paid for Monchi? Why is the main sponsor still missing? I do not understand why Roma always sells players, it’s a certainty and undeserved. The club is always forced to sell for financial problems. Lastly, the relationship between the club and shareholders is lacking. This club had a summer transfer market in which two of the guys have never even played (Schick and Karsdorp), oh wait, one played yesterday but is already injured. We need explanations! Forza Magica!”

Rome CEO Umberto Gandini: “The capital increase will be completed by 31 December, 2018. The main sponsor? Obviously I do not have any news, but I can say that there is constant research on this matter. We continuously receive proposals for sponsorship. We have open tables, and we are working full-time on this issue.”

Roma director Mauro Baldissoni: ”Angeletti asked us to justify the salary being paid to Monchi: this is due to a sign-on bonus he was given, here’s the payment for the entire 2016-17 year. Roma did not pay his release clause (with Sevilla). There is no sanction against us by UEFA, we are talking, but there is only one parameter we’re outside of. There will be no other sanctions.”

”Football is an economic business, the club wants to increase its revenues, which have grown considerably. Although, this year they have declined due to the lack of participation in the Champions League last year. We are optimistic and not pessimistic about the future, our goal is always to be positive. We will continue to work towards increased revenue. Ticket prices? Our subscriptions are cheaper than our rivals. For single matches, we have lots of promotions. As for the Stadio della Roma, we hope we can have the first match in the new stadium in August 2020. I think it’s a very credible date.”

The board then approved the €120 million capital increase. 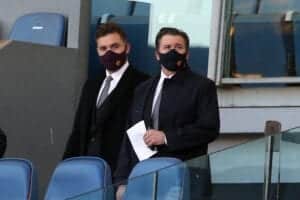