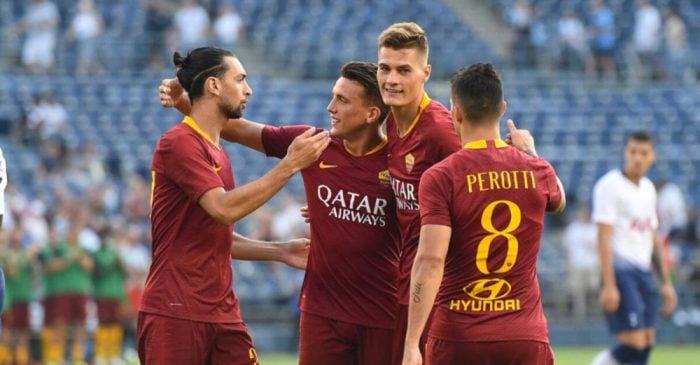 Although Roma ultimately fell to the might of Liverpool’s venomous attack last season, the club’s run to the semi-final was a major watershed moment for the men from the capital. The 3-0 defeat of Barcelona in the second leg rightly went down as a defining moment in the club’s history, and gives Roma every reason to believe that they can go one better this season.

Naturally, such a result could never have been produced without a raucous home crowd to cheer Roma on, which makes the first home Champions League match of this season all the more important. In terms of having an ‘easy’ start at home, Roma fans could not have wished for better, and on 2 October, will welcome Czech champions Viktoria Plzen to Rome for the second time in three seasons.

Viktoria Plzen have the lowest UEFA coefficient of the entire group by a considerable distance, with teams representing the club failing to progress on both occasions that Plzen’s name has been in the group stage draw. Roma also thrashed Plzen 4-1 as recently as November 2016, in the Europa League group stage of 2016/17:

Usual warnings against complacency aside, Roma teams are unbeaten at home in the group stage since December 2014, and in addition, last experienced a losing home opener in September 2008. From a Roma perspective, this combines well with the fact that no Plzen team has won an away game in the Champions League since August 2015.

Said victory came in a qualifier against Maccabi Tel Aviv, and thus Plzen’s most recent away win in a group stage Champions League game actually came back in November 2011 – 2-1 at Dinamo Minsk.

So far, that is also Plzen’s only CL group stage away win to date. The Czech outfit’s away results against teams from the top four leagues of Europe (Premier League, La Liga, Bundesliga and Serie A) – all of which enter four teams into the CL via their league – are also startlingly bad, with only one win in the last eight games that fall into this category:

Within that sequence are two serial champions, Bayern Munich and Manchester City, the latter of which is odds-on in the Premier League odds 2019, so it is not a record without mitigation. Indeed, regardless of the perceived gulf in class, the Plzen team that visits Roma next month will not want for a collective sense of raging vengeance. No injuries in the interim permitting, there are no less than five survivors from the starting XI that lost so heavily in Rome two years ago.

Amongst them is Slovakian international goalkeeper Matus Kozacik, and Czech international striker Michael Krmencik. The attacking midfielder also scored the equaliser in Plzen’s last visit to Roma, with the scoreline remaining at 1-1 until a half-hour implosion gave the final score a more one-sided feel than the actual action suggested.

Roma ultimately have no excuse, especially since last season saw Roma go five home games without conceding for the first time ever in the Champions League era (1992-present). Meanwhile, the last Plzen team to keep a clean sheet against any team in the top four leagues was the one that escaped from Naples with a shock 3-0 win in February 2013, during the 2012/13 Europa League knockout stage.