Sassuolo’s Davide Frattesi pushes for Roma return: “Roma is everything for me.” 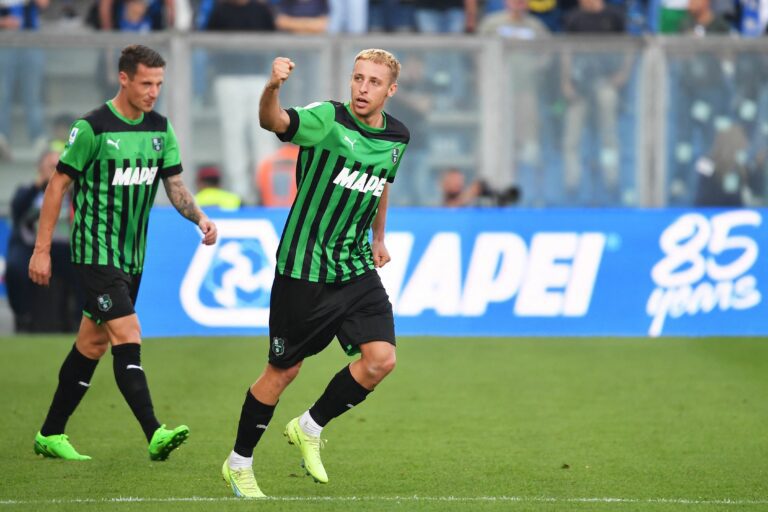 Sassuolo midfielder Davide Frattesi went in depth about his eagerness to return to the Italian capital in a new interview with Corriere dello Sport.

The 22-year-old recounted the day the capital club sold him to Sassuolo as part of a deal for Gregoire Defrel in 2017, and his need to redeem himself in the eyes of most Giallorossi fans.

“When Roma decided to sell me to Sassuolo, I was disappointed because I hoped to spend my entire career there. I felt this kind of detachment-related anxiety.”

“But rationally I understood the logic of the club that needed to close a transfer deal. And I’m happy with the how far I’ve come since then. I have traveled many places and have always played as a starter, reaching a good level of maturity.”

“Then the last summer window… this time I was convinced that it was all done. And I have already explained that I paid for this disappointment with an inadequate summer training camp, which was disrespectful to Sassuolo.”

“The coach, Dionisi, had to take me away from training a couple of times because I wasn’t focused. And it was only right. On the other hand, here too, I understand Roma: they couldn’t wait all summer to sign me. And I understand director Carnevali: he couldn’t dismantle the team and had already collected a lot of money from the sales of Scamacca and Raspadori.”

“When my agent, Giuseppe Riso, was discussing the contract with Tiago Pinto, I bumped him with my elbow to make him understand that I didn’t give a damn about the money. I just wanted to play for Roma.”

“I don’t think I will join Roma in January because I think Sassuolo need me now, but perhaps in the summer… I told my agent, you helped Mancini and Cristante get their new contracts, now it’s my turn!” he said jokingly, as he referred to Beppe Riso’s other clients, Gianluca Mancini and Bryan Cristante, both of whom have recently extended their contracts with Roma.

“Roma is everything to me. I was born in Fidene, a hundred meters from my friend Scamacca. The idea of ​​scoring a goal at the Olimpico with that jersey, in front of all the people who love me, would complete my journey. It would be like saying: now I made it.”

“Other clubs? I have received plenty of offers, but I have expressed a preference for Roma.”