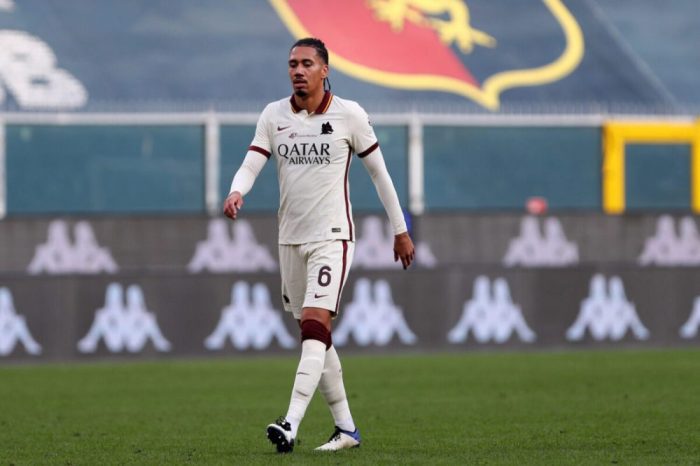 The 30 year-old, who will celebrate his 31st birthday in two days, began by

“The plaudits and the love I get from the fans – I think what they want in a central defender is someone who is stable, strong and able to lead,” said the 30 year-old, who will celebrate his 31st birthday in two days.

“And that is something I felt like I have been able to bring. That was what the club wanted by bringing me back this summer.”

“My Italian? I should hopefully be fluent soon enough. It would not be as much of an achievement as getting Roma to win a trophy but it would be something that I could hold onto for the rest of my life. That is a real big aim of mine…it is so impressive when you see people mix between languages. I would see it as a massive life skill.”

Smalling then shifted to his farewell from the Red Devils, where he spent ten seasons before joining the Giallorossi last summer.

“We could have finished the season (2018-2019) better but I was a regular and I was up for the battle that was to come. Obviously there was a rumour that Harry Maguire was going to come in. I have spoken before about how each year the manager brings in a central defender and by the end of the season I (still) do play more games than most. I knew that was coming.”

“I was focused on getting better and playing for United. The interest from English clubs and others I just totally dismissed because I didn’t see myself going anywhere. As that season started I found myself not even on the bench which is something I have never experienced.”

“I guess that was maybe the lowest point at United. That was the shock I didn’t expect. How it was handled…if I was told earlier that summer – and I don’t want to have a dig at Ole – I would have made other plans.”

He continued, “I knew that my days under Ole were pretty much numbered. I was just a bit frustrated. One, I would like to have been told earlier and then, secondly, I was only able to go with just a day left of the Italian window being open. The English window had shut. I was left in a very shit situation. I had to decide.”

“In an ideal situation I would have known early in the summer and made plans and it almost got to the stage where I had a day left. My wife had just had a kid as well. There was a lot going on that happened at the last minute.”

“And I really wanted to play. I had not been used to sitting on the bench. Even if Ole had said, ‘OK, you’re now third-choice but you have a chance of playing’, that was all I needed to hear. I would have stayed. I obviously made that decision to go and my wife was very supportive. She had just had a kid and now half the time I was going to be away with the team. I can’t thank her enough in terms of her support.”

“It was challenging at times,” Smalling says. “I had to have some direct conversations with Ole. I had to speak to Ed Woodward to try to get some clarity and to get some movement.”

“The previous season I was ultimately very lucky (to join Roma on loan) even though I was left in limbo and told at the last minute. Otherwise I was basically going to be sitting in the stands all season. It was a case of, ‘You can either do that for the whole season or you can go to another country.’ I had been left in the hands of United. This year I almost wanted to take some ownership of my career. I had all summer to think about the best option and have the time to be able to do it.”

Smalling then discussed his permanent transfer last month as he returned to the Giallorossi in a move that was made officially in the dying seconds of the transfer window.

“There was more than one occasion when I didn’t think it was going to happen,” said the defender.

“Even in the week before. There were a couple of times when it was very close and it was pretty much off. It was probably 50-50 for quite a lot of it. We knew everything had gone through our side but then it hadn’t been ratified. It was probably for the next hour we were still waiting for that confirmation.”