Smalling: “I never wanted to leave Roma. Everyone knew I wanted to come back.” 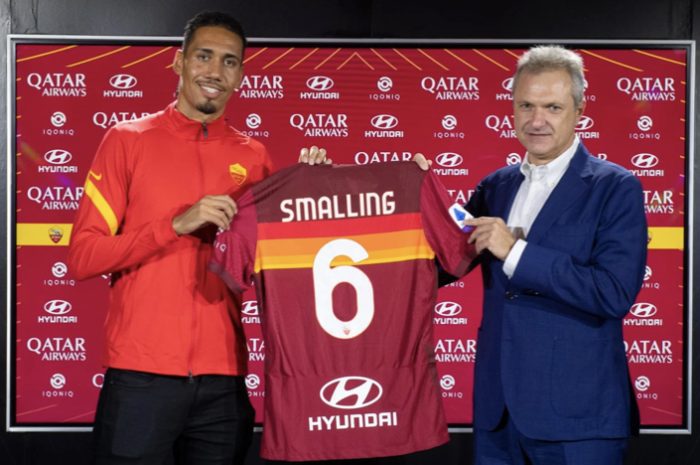 Newly acquired Roma defender Chris Smalling spoke to the Giallorossi’s official website today after having completed his move back to the Italian capital.

Roma struck a deal with Manchester United late yesterday for the permanent transfer of the 30 year-old for €15 million.

Thank you! It’s a massive, massive relief. I think that everyone knew I wanted to come back and to finally get it done, albeit so close to the deadline, it’s just pure relief. Now I can enjoy being back and then get straight back to it with the team tomorrow.

The fans were clearly eager to have you back… what was that reception like at the airport for you?!

It was truly, truly special. I could feel tingles up my spine. To see such a big crowd as soon as I landed… honestly, I felt the love from the fans as soon as I first stepped on the pitch but it has just grown and grown [since] and it’s just such a special feeling.

Have you ever had something like that happen to you before?

No, I haven’t. A few times I’ve seen players sign at various places and they might get a crowd, but to have it happen to myself is something I never thought would happen. To have that just makes me want to really give back as much as I can.

It was an ‘ongoing’ negotiation, shall we say. What was it like for you, in the middle of it – was it a bit of a rollercoaster?

Yeah, it was! I’m generally known as quite a calm guy but there were definitely times when I was just so up and down [emotionally]. Obviously, me knowing what I wanted to do but waiting for it to happen.

But everyone here worked so hard to get it done, and I am so thankful to everyone who helped in that process.

You said that, as soon as you arrived here, this felt like home to you. What exactly is it about this club and this place that makes you feel like that, do you think?

I think it’s the passion. Everyone here lives and breathes football. It’s something that is spoken about non-stop. Obviously when I first arrived they were talking about the derby, and how we’ve got to win that, and then even from my first game I think that it’s just been a great feeling and something I’ve never wanted to leave.

Have you heard from any of your teammates since the deal was made official, and what did they have to say?

Yeah, yeah, they were over-the-moon to be honest. I spoke to a lot of them, I even spoke to them over the summer, after the season, because I went on holiday to Sardinia so I saw quite a few of them there.

We’ve been in touch, and a few [messages sent] waiting to see when it’s going to happen. I’ve been quite close with them; even though I’ve not physically been here, I’ve been able to talk to lots of the other players.

Have you spoken to the coach since the deal was done, and what did he have to say to you?

Yes – obviously I’ve just arrived so I haven’t seen him [in person] just yet, but we’ve been speaking since it’s been done. We’re both relieved and happy that we can work together again and really help Roma.

There have been some other additions to the squad over the summer. If we start with Pedro, a player you must know well from the Premier League, what do you think he will add to the team?

I think the whole world knows he is a special player, and I’ve played against him a few times now. So to have that calibre of player on our team is special.

Obviously seeing what he did at the weekend [against Udinese], he’s been known for doing that throughout his career so it’s extra special to come in and there be a few other new additions to give us that extra boost this season.

Another player who has joined, Marash Kumbulla, said he used to watch you a lot last season to learn from you. Is it good to have another young defensive addition, and will you be looking to pass on some of your experience to him?

Yeah, I think he’s obviously a young guy but he’s someone who, playing against them [Hellas Verona] last year they were a team that was known to be very solid defensively so he’s obviously a great addition to ours.

I think we need those types of additions in all positions to give players that boost to be able to kick on, because we need to do better than last season and that’s the aim.

Obviously you have not been here but have you watched the team’s games so far this season, and what have been your general impressions?

Yeah, very much so to be honest. I’ve had them all in the calendar, I’ve got the [TV] channel at home, so I’ve watched all the games. And yes, obviously with speaking to people at the club as well, other players, over that time it’s great that I can now finally contribute and help the team where possible.

I imagine it must have been tough to watch the team, to not be able to help…

Yeah, I think, obviously whilst you are playing you are a fan – and then whilst I wasn’t able to play I’m even more of a fan because I want them to win! But obviously I want to be there as well… but, yeah, I had my whole family with me and we’ve all been watching Roma in Manchester.

Well now you only have a two-week wait until the game against Benevento and hopefully you’ll be back out there. How do you feel fitness-wise, and will you be ready for that game if the coach picks you?

Yeah, I think I will be more than ready. Obviously I wasn’t training too much with the team there [in Manchester] but I’ve been physically fit. I’ve been doing double training sessions from the get-go and I feel physically very fit.

I think this period actually gives me a good chance now to settle in again with the team and be firing again come next Sunday, ready for the manager.

You’ve signed the contract now, three years here – so what are your targets for that period, both individually and for the club?

I think one of my first goals was to be here long-term, and now it’s about getting a trophy. I think that was something that was alluded to me when I first joined and I think now that is an aim that this club needs. Because I think even when I joined, this is obviously a massive club – but it has been without a trophy for a long time now.

So that’s going to be one of my aims and I’m sure one of the team’s aims this season, to really give something back for the fans to cheer about.

And then finally, the classic question to finish: Do you have a message for the fans?

Just that I am so happy to be here. I have been fighting hard to come back and finally we are reunited. I am ready to give my all, I can’t wait to get going again!