Smalling: “I’m lucky to be here. Once I knew there was concrete interest, I wanted to get it wrapped up very quickly”. 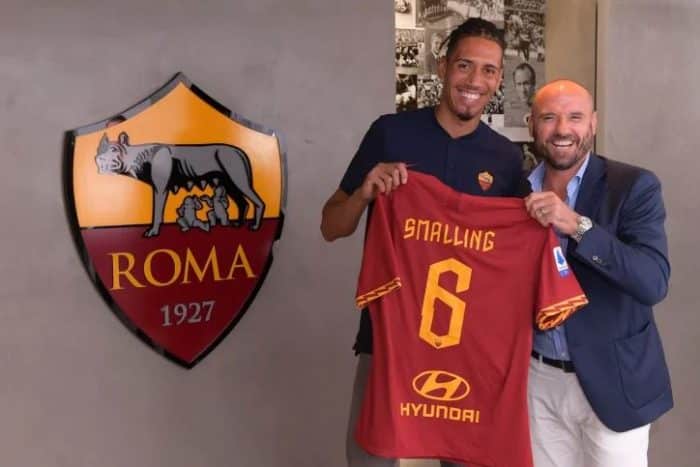 Newly acquired defender Chris Smalling gave his first interview today to Roma TV since officially joining the Giallorossi on loan. These are his words to Roma’s official television station:

“As soon as I heard the interest was there, the chance to experience a new league with a big team that has got big aspirations is what I needed. I’m lucky enough to be here now. There started to be a few rumours not too long ago, and it got me interested – but you are never too sure whether it is true or not. Then once I heard it was concrete I wanted to talk and get it wrapped up very quickly.”

Was the presence of other players you know from England, like Edin Dzeko and Aleksandar Kolarov, a factor in your decision?
I think that was definitely a factor, knowing they are experienced players and what they’ve achieved – both in the Premier League and here. Speaking to them, speaking to other players who have played in Italy, there was such good noise around Roma and Serie A itself that it was a bit of a no-brainer.

Was playing for a foreign club always an idea you had in the back of your mind at some point in your career?
Growing up obviously you want to play in the Premier League, but deep down I also had that aspiration to play abroad. Watching Serie A over the years, being one of the top leagues alongside the Premier League, and [now] being able to come and experience that – and at such a big club as well – it was the perfect opportunity for me.

What are your first impressions, after touring the facilities here at Trigoria?
I think how amazing everything at the club is. The attention to detail with everything, the quality of the pitches, the media centre, the facilities. I’ve been doing medicals most of the day but coming to the training ground and getting to see where I will be every day, where I will train, getting a feel for it all… I think it’s been a perfect day.

Do you think a fresh start and new surroundings will be a good thing for you?
Yeah, I think it is. I think if I was going to leave Manchester United I had to go to a club that was big, that has big aspirations and big targets and this club has all that. It has the history and has big, big targets that I want to be a part of and help to come true.

Paulo Fonseca has been clear about what he wants from a defender recently. Do you think you can fill that role?
I think as soon as I spoke to the coach and we spoke about how he sees the game and how he wants the team to set up I felt it was the perfect fit for me. I have the experience and if you want to play that high line then you do need defenders with pace, so hopefully I can slot straight in. I’m looking forward to joining up with the team.

How helpful was speaking to the coach in making your decision?
It was. As soon as you hear about a club’s interest, you want to speak to the manager and hear the technical side of how he sees the team fitting, and how he sees you fitting, and everything else. And our conversation got me very excited, I think as soon as I left it I was thinking, ‘Let’s make this happen’. It was that final thing I needed, to have that conversation with the manager, but I would say that almost straight away – within 30 seconds – I wanted to make it happen.

Roma fans are getting to know you know, and they’ve probably read about a number of charitable causes you have become involved in recently. Can you explain a bit more?
I got to a stage where I always wanted to help and give back, and I felt like the last couple of years it had become the perfect time to use my platform and my status to help the younger generation. Football Beyond Borders is one of the causes I am very passionate about, and am getting stuck into. They are giving a lot of dreams to a lot of kids who struggled like I did when I was young. When you are young, and its a one-parent family, it can be tough – so that has been one of the many causes I have enjoyed being a part of.

They will have also read that you have recently gone vegan. Can you explain a bit more about that – and does it mean you will never try a famous Roman carbonara?
I’d have to have a vegan version! I think the beauty of the vegan diet is a lot of the dishes I used to have before I went plant-based, I can have a vegan version too – just in a different way, without the animal products. But since I have made the switch I’ve felt a lot better; I’ve felt energised, my injuries have been better and I think it has aided in my development. I’m enjoying that lifestyle.

You arrive just before one of the biggest games of the season – the derby. How excited are you to experience that atmosphere?
It is a game that is always on television, all over the world. It’s big in everyone’s minds, across the world. Just in terms of the fans, they are crazy and that is what we need as players – it drives us on. So to come in and have the derby within a couple of days is the perfect setup.

How is your fitness and when do you think you will be ready for selection?
Ever since I came back for pre-season I’ve been in good shape, I have not had any injuries – touch wood – so I’ve been able to train every day. Obviously I have not had that game-time over in England but I’ve trained every day and fitness-wise I’m feeling really good. So I hope I can hit the ground running when I start training.

What are your goals, individually and as a team, this season?
As a team, when I spoke with the manager about the team’s targets, it was to do well in Serie A and qualify for the Champions League, and then to compete in the Europa League and try to win that. There are a lot of targets there that I want to be a part of, and help make this club an even greater success.

And finally, do you have a message for the fans?
I think I am someone who is very open and honest. I will always give 100% and I hope for some fantastic support and I will do everything I can to have a positive impact.