Spinazzola continues to impress after Bologna win: “My best start to a season.” 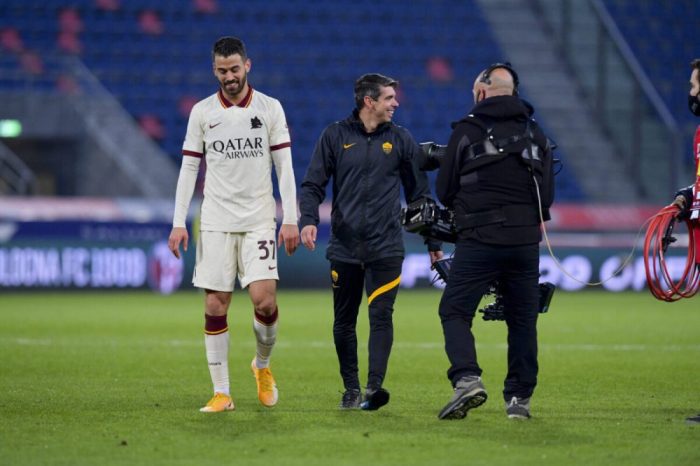 Roma defender Leonardo Spinazzola was all smiles following the Giallorossi’s decisive 5-1 victory over Bologna this afternoon.

The Italian wingback, who had one assist on the day, had a superb performance as the Giallorossi were forced to play the match without manager Paulo Fonseca on the bench. The Portuguese tactician was serving a suspension following a red card he received last weekend but despite his absence, Roma put in their best performance on the season.

“The first half was absolutely perfect. In the second half, they changed formation and we had a few issues because I think from a mental standpoint, we lowered our guard,” said the 27 year-old to Sky Sport.

“I think this is the best start I’ve ever had to a season — and that includes my time at Atalanta. I hope to continue like this for a long stretch, especially when you consider that the Euro’s are next summer.”

Spinazzola was then asked about his collapsed transfer to Inter last January. The defender was steps away from leaving the Italian capital after just six months but the deal never went through after Nerazzurri executive Beppe Marotta called it off.

“I’ve mentioned in a few interviews since January that I’m thankful that the deal collapsed because it’s given me additional motivation,” he admitted.

“From a psychological and physical point of view, it has transformed me. I also switched dentists, which has helped me a lot. I play a lot but even at the 90th minute I’m still able to keep going.”

”I train harder, I stretch more, I do more gym work — I changed just about everything. I want to keep going like this because I feel good.”

“We know that we’re a strong team — we’re more familiar with each other than last year and now we have a formation where even those who come off the bench are at the same level as the starters.”

“The season is long and it’s going to be tough. There’s three matches left before the winter break and we have to earn as many points as possible.”