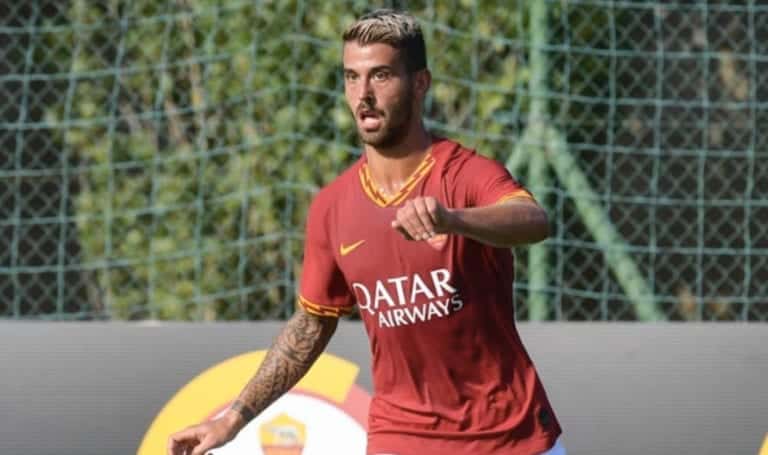 Roma’s Leonardo Spinazzola gave an extensive interview to the club’s official website and discussed a variety of subjects. These are his words:

Let’s start from the beginning. What was Leonardo Spinazzola like as a child?
I was just football, football, football – I’d be out by my house playing football from dawn until dusk. I lived in Foligno, in a district where we had a skating rink, which us kids used as our football pitch. We’d start playing at 10 in the morning then start again after lunch, at around 4pm, for the afternoon tournament. We’d have a break for dinner but at 10pm I’d still be out playing football and then hide-and-seek at the end.

What was the first team you played with?
When I was 5, I played at a multi-sports club near where I lived, Virtus Foligno. I started in their youngest age group and continued until the age of 14.

Did you always want to be a footballer or did you play other sports too?
I’ve never had any doubts – I’ve always been obsessed with football.

Who was your idol when you were growing up?
Ronaldo Nazario da Lima, O Fenomeno. I remember being at home and watching a VHS that my father bought me at the newsagents; I then went out and tried to copy the skills and goals I had just seen. I also watched Rui Costa and [Gabriel] Batistuta a lot. I liked the former Giallorossi striker very much: when I’d celebrate with Virtus Foligno, I’d copy his machine-gun celebration. There are video tapes of me celebrating like that.

Have you always played as a full back?
No – when I was young, I played as a forward. I used to score goals until I was 12, then they dried up!

When did your position on the pitch change?
I first played wide in a five-man midfield when I was at Siena, in Serie B. I remember being told when I was 16, by the Primavera coach Marco Baroni, that to go far in football I’d need to play as a full back. To start with, I didn’t agree – I wanted to play as a winger. However I slowly dropped deeper as the years went by. After Siena, during my first stint with Atalanta, under Stefano Colantuono, I went back to playing further forward. However, when I went to Perugia in 2015, Pierpaolo Bisoli played me at full back and that’s basically where I stayed from then on.

Was there a moment when you thought you wouldn’t be able to play football professionally?
In my first year in Siena, having left home at 14, it was hard to live alone away from family and friends. On top of that, I immediately injured my ankle and among other things I had to travel a long way on crutches to go to and from school. Then I got back playing again and after a few weeks I pulled a muscle. At that moment I called home and said: “Come and get me – I’m coming home. I cannot do this.” My mother, along with my father, was very decisive at that point; she advised me to grit my teeth and keep trying … and she was right. From March onwards everything went much better.

You’ve gone on loan many times. Would you have preferred a bit of stability?
Being purchased by a team like Juventus as a youngster, it was natural for me to have to work my way up at smaller teams. At the start it was tough to break through but from the 2015/16 season, from my experience at Perugia onwards, I found that consistency I’d been looking for.

How has your life changed over the past few years in Serie A?
In terms of exposure my life has changed, very much so. However I’m still the same Leonardo. Clearly after my time in Bergamo and particularly when I went to Turin, people recognised me more when I was out and about.

Your two years at Bergamo have been key to your professional development.
At Atalanta, with Gian Piero Gasperini, I learned to handle high intensity out on the field. He makes you work very hard in training, to the extent that actual matches seem like a stroll in comparison. It’s true – you play matches like they’re a warm down because during the week you work so hard. He’s good at communicating how he wants his team to play – when you’re out on the field you know exactly what’s required and this interpretation of the game opens up your mind. Some of Gasperini’s ideas, his way of interpreting football, I’ve seen with [Paulo] Fonseca.

What did you learn from your year at Juventus?
So much, both on and off the pitch. As [Massimiliano] Allegri said, you need to have a champion’s mentality to play there. You train with so many top players, who show that on the pitch but also with their mindsets. Above all I’ve learned the level of focus you need throughout the year, in training and in matches, which ultimately is what makes the difference.

What’s the match of your career you remember most fondly?
Obviously, given how important it was, the 3-0 win over Atletico Madrid in the return leg of the Champions League round of 16 in Turin. However that wasn’t the best performance of my career – I had better games with Atalanta. If I have to pick one out, it would be the Europa League game against Dortmund at the Signal Iduna Park in February 2018. That was my first great European experience.

Who is your best friend?
There are three guys – Marco, Luca and Dino – and we’ve known each other all our lives. We used to play together when we were young at Virtus Foligno and we’ve stayed friends. They’ve come to visit me wherever I’ve played. Now I’m here at Roma, I’m closer to them, so I’ll see them more often.

In football, who are you closest to?
Rafael Toloi and Gianluca Mancini. The latter is a team-mate of mine here, having played together in Bergamo and Perugia. Back in Umbria we were very close, then at Atalanta we’d be roommates on away trips. I’m glad that he’s come to Roma too.

What is a typical day for Leonardo Spinazzola?
Early in the morning I take out Yago, my Labrador. Plus, since my son Mattia was born, my wife Miriam and I fill our days spending time with him – it’s amazing. After training we often go for walks all together, family and dog.

What do you do with your free time?
I used to play the PlayStation a lot. However since I’ve been living with my wife, of course I don’t do that – it’s not very nice. We often watch TV series and we listen to a lot of music. We went to see Beyoncé in Milan, which was incredible – she’s a fantastic artist. Even my son Mattia, who’s now 14 months old, likes to dance in front of the TV.

How much has fatherhood changed you?
So much. Before I used to reason like a child, but I feel a new level of responsibility since Mattia was born. I’ve never been crazy off the pitch but I’m still calmer and, above all, happier.

How many tattoos do you have?
I have the infinity symbol, which I had done along with my wife. I also have a Maori tattoo on my right arm, which has various symbols within it that represent family, love, strength and fortune. Now, with my son having been born, I want to get one dedicated to him in some way on my other arm.

You’ve made seven appearances for the Italian national team – what does wearing that shirt mean to you?
I’d be glued to the TV watching the national team matches when I was a kid. Playing in the team now, knowing that I’m on the other side of the screen, with all Italian people watching you, is wonderful. Making my debut was special, in Amsterdam in a win over Holland. It’s a moment that has given me even more confidence.

How important to you is the target of the European Championship?
It’s important for all of us – for Italian football, for us players and for every fan in the country. I’ve never played in a competition like this, not even at youth level, so I’m even more motivated.

You’re now at Roma – what does that mean to you?
I’ve always seen Roma as a big club and a big stage, with great players and quality squads. It’s always wonderful to play at the Stadio Olimpico, because of the stadium itself, the fans and their intensity. This is an important step in my career and I want to do as best I can.

What are your first impressions of the team and your team-mates?
We’re a new group of players – there’s a positive vibe. We’ve got a lot of young and hungry players, who are working hard and showing the right spirit. We’ll need time, since we’re a newly-assembled group with a new coach. However, as I said, there’s a lot of eagerness, energy and motivation among my team-mates.

What’s your impression of Paulo Fonseca?
As I said, with him I’ve seen some of the ideas that I encountered during my time with Atalanta. I like the way he sees football. He’s a very direct person on the field – he knows what he wants to see and manages to get that across. He wants a high defensive line and we’re working on movements that are new to me. In attack, the wingers have several different jobs. He does a lot of work on specific departments of the team.

Do you have a message for the Roma fans?
We need to stick together – we have the same objective, which is the good of Roma. Our job is to play as best we can, with the aim of winning every game. We may or may not achieve that, but the key is to aim for it. To do that, we need to train as hard as possible. What I can say to the fans is that I will be fully committed to those efforts.