The key difference between Mourinho’s stay in England and Roma 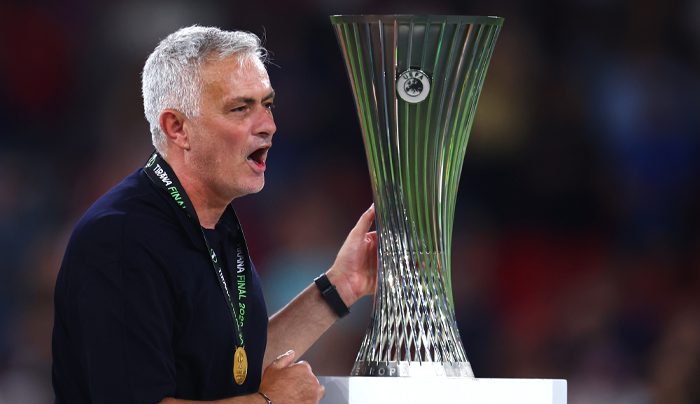 Roma manager Jose Mourinho is preparing for his second season in the Italian capital after he guided the club to their first European trophy in late May.

The Giallorossi defeated Feyenoord 1-0 in the first inaugural UEFA Conference League Final on May 25th in Tirana, Albania thanks to a smooth finish from starlet Nicolo Zaniolo.

The victory capped off a whirlwind season for Roma and marked the fifth European trophy won by the Special One. So it’s worth taking a look back at the 59 year-old’s first full season in Rome and what could be in store for the upcoming season.

Following his sacking from Tottenham in April of 2021, many were stunned to learn Mourinho would become the next manager of AS Roma, replacing compatriot Paulo Fonseca.

The move rocked the footballing world in Italy and represented Mourinho’s “official” return to Serie A following his exit from Inter in 2010.

He penned a three-year contract with the club and insisted his expectations were still incredibly high despite Roma’s lack of historical success.

“I guess the question is coming anyway, so perhaps I can answer it in advance: ‘Why am I here?’ Well, we are near to the statue of Marcus Aurelius and, as he once said, ‘Nulla viene dal nulla, nulla ritorna dal nulla’. This has a very similar feeling to what I experienced when I spoke with Dan and Ryan (Friedkin) for the first time,” he said during his introductory press conference.

“What they want for the club is very clear. You should never forget the past, but we want to build a future. In football the word ‘time’ never seems to exist, but here it does. What the ownership want is not success today and then problems tomorrow. Now the time has come to work. Along with my staff, those who have come with me, but my staff work with all of us. Everyone. We are not here on holiday, to be tourists: we are here to work.”

“Roma has the name, the symbol and the colours of Rome, it is linked with the city throughout the world. That’s a big responsibility. But we are here to work.”

The difference between Serie A and the Premier League

The capital club hadn’t won a major trophy since 2008 and still had a long way to go before challenging the likes of Inter, Juventus, and Milan.

However, this didn’t dissuade Mourinho from accepting the role—admitting he relishes the ‘underdog’ mentality.

“The great thing about my career is that, aside from the Europa League with Manchester United, doing it with Porto, Inter and Roma is very, very, very special,” Mourinho said after their Conference League title.

“It is one thing to win when everyone expects it, when you made the investments to win, but it’s quite another to win when something feels immortal, that feels truly special.”

“This remains in the history of Roma, but also mine. I was told only I, Sir Alex (Ferguson) and Giovanni Trapattoni won trophies in three different decades. It makes me feel a little old, but it’s nice for my career.”

“Now I am staying, there are no doubts. Even if some rumours emerge, I only want to remain at Roma.”

How and where to bet on Roma in the UK

With football being the single largest sport in the UK, fans are spoiled for choice when searching for quality sportsbooks, even when it comes to betting on foreign championships.

From Bet365 and 888Sport to SBK and Hollywood Bet, UK players have lots of choices when it boils down to picking a bookie to bet with. With such a competitive betting market, top UK sportsbooks are known for offering large welcome offers to invest on the most important football tournaments in Europe (like Serie A or Europa League, where AS Roma will play), such as the William Hill promo code, offering a “bet £10, get £30 in free bets” welcome offer.

The UK sports betting market is highly regulated with all betting sites requiring a license from the United Kingdom Gambling Commission (UKGC) to legally offer sports betting. These strict rules and constant scrutiny make UK bookies the safest in the world for bettors to join and wager with.

Mourinho’s stay in England and Roma may be different in terms of the traditional success of the respective sides—but that doesn’t detract for Mourinho. There’s no doubt it’s always a bit sweeter winning silverware with a club starving for trophies.

In just his first year, the ‘Special One’ succeeded in ending Roma’s 14-year trophy drought while simultaneously capturing their first European trophy.

Roma supporters to wager and place a bet on Mourinho’s side in Year Two have a huge number of options. With the bet £10, get £30 in free bets welcome offer from William Hill—now is the perfect time to sign-up and get in on all the Serie A action.