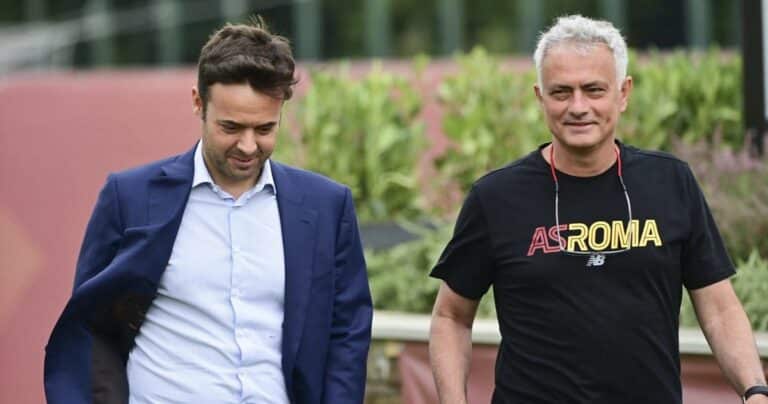 Roma General Manager Tiago Pinto went in depth about the upcoming second half of the season, the implications of UEFA’s Financial Fair Play regulations and Mourinho’s impact on the club’s transfer market.

“As a director I am proud of how we went back to winning by improving the squad considerably and constantly. More importantly, however, we were able to significantly reduce by €25 million the team’s salary spending,” Pinto told La Gazzetta dello Sport.

“We did so by getting rid of players who were not functional to the team and yet earned a lot of money, which is something that took a toll on the club in the past. At the same time, we were able to give a chance to the younger players from the Primavera, allowing them to contribute in the first team.”

“The club have modernized the training facilities, rebuilt a scouting network and updated match analysis, investing in the Women’s team.”

“Criticism? The truth is that the team has gotten stronger in each transfer window. In the last year and a half, 14 players were signed. Since their arrival, the Friedkins have invested around €150 million in transfers.”

“Last year Roma was the team that spent the most in Serie A: around €90 million, €40 of which for Abraham. This year Dybala, Wijnaldum, Matic, Belotti arrived. If we had told the fans two years ago that Mourinho and these players were coming, they wouldn’t have believed us. And in fact the enthusiasm around Roma has gone through the roof.”

“FFP? As a club we believe in Financial Fair Play because it is an important tool towards economic sustainability, but it is certain that the limitations of the UEFA settlement agreement have forced us to change our strategy. Signing world class players without spending money on pricetags and without increasing the salary spending must be a source of pride not criticism.”

“It is not always possible to buy all the players you would like: due to the UEFA’ stakes regulations, today we cannot identify an ideal player, approach his club and ask him to simply come over. As a result, we don’t have the players we always dreamed of but we do have all the players we need to reach our objectives. Because we live in the real world, not the one made only of desires.”

“I thank Mourinho because many players have seen him as an important reason for choosing Roma. His support and his popularity were fundamental. We are all aware that with the coach we have, the squad we have and the structures available, we have to do much better in the second half of the season.”

“Karsdorp? After the match against Sassuolo and Mourinho’s scalding, the player committed a serious offense at a disciplinary level by not showing up for training and refusing to participate in the tour in Japan.”

“We avoided further controversy by trying to work internally and with the player’s entourage. Ricky came back, trained and played with us. Unfortunately this week someone close to him spoke out against us, compromising some of the work that had been done by everybody involved.”

“Our coach didn’t beat around the bush, but after each game there’s always an emotional aspect that’s not always easy to control. There are many other examples, even recent ones, in top Premier League clubs. These things happen often in football. However, many have forgotten that the best version of Karsdorp was with Mourinho, who used him 60 times as a starter in the period of 18 months. We accept the criticisms, but I can’t allow a player to take advantage of the situation to damage Roma.”

“Karsdorp is on the transfer list, but I won’t let him leave for free,” reiterated Pinto.

“Technically we need an additional defender but any incoming players will always be dependent on the outgoing transfers.”

“Dybala? I see him happy here, he needed to feel important again and he’s succeeding in Rome. He gets along very well in the locker room, with the coach, in the city, with the fans. I’m not afraid that Roma may not be enough for him. Paulo will help us get to the level we want.”

“Smalling? We want to keep him, but he has to give us an answer. He has a release clause in his contract. We paid €15 million plus commission for him, and he receives a salary of €4 million. Roma have invested a lot in him, waiting for him patiently during his injuries. He knows we care about him.”

“Frattesi? FFP has prevented us from carrying any negotiations forward with Sassuolo due to their demands at the moment.”

On the links between Mourinho and Portugal: “When you hire a coach like Mourinho you have to be prepared for rumors. In these eighteen months it hasn’t been the first time that another club or a federation has been interested in him. But in the Algarve we didn’t suffer any distractions. Our only focus was to improve to get back to winning right away. I’m Portuguese, every time Portugal change coaches we talk about Mourinho. But we count on moving forward with him.”